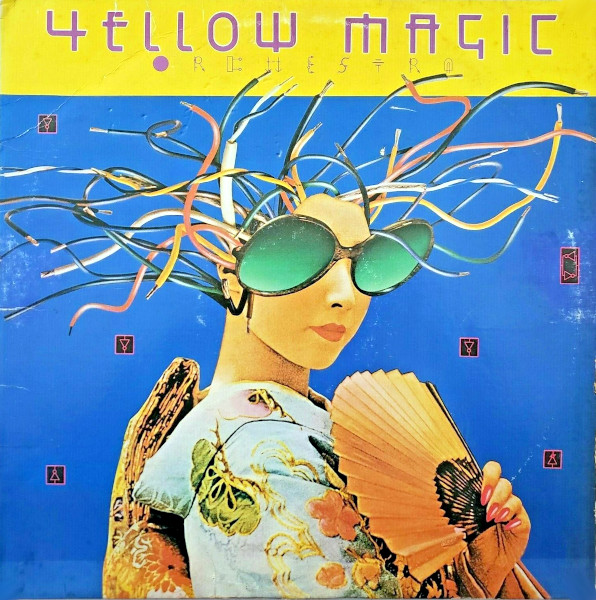 A pioneering Japanese trio of electronic musicians sets out to make lounge music for the space age.

It would be easy to dismiss Yellow Magic Orchestra’s debut album as Japan’s answer to Kraftwerk, but it’s not so simple. YMO owed equal debts to the music of Giorgio Moroder and lounge music pioneer Martin Denny, and so what you have on Yellow Magic Orchestra is electronic lounge music for the 21st century; the sort of thing you’d expect to come blaring out of a bar in Bladerunner.

I was nonplussed when I bought this record in 1980 and I’m still nonplussed today. I don’t know if I’m listening to a new kind of electronic music or a novelty record. To read it today, there was a whole generation of music fans who were heavily influenced by the work of Yellow Magic Orchestra, Yello and Sparks. I can only tell you that I didn’t hang out with any of them.

The album generated a small sensation—a novelty single, really—with Computer Game, a song that combined sounds from the Atari videogame Circus with an electronic version of Martin Denny’s “Firecracker.” (The elpee version inexplicably credits “Firecracker” as only two seconds long.) Maybe YMO is trying to make a statement here that video games have become the new background music to modern life, or that computers have a place in art. Or maybe they just thought that bringing in video game sounds instead of bullfrogs and birds was a cool idea. Simoon is a noirish song with a vaguely European feel that includes some interesting electronic insect sounds at the end. Cosmic Surfin’ isn’t a surf song in any sense that I’m familiar with, but it is a lot of fun. All in all, the first side of music feels like lounge music for the sci-fi set.

The second side would seem to take a playful poke at western stereotypes of eastern music. Yellow Magic is a cool slice of electronic disco that should please fans of Giorgio Moroder’s music, while La Femme Chinoise, which features vocals from Yukihiro Takahashi, points forward to the music of Jean-Michel Jarre (Les Concerts en Chine) and Orchestral Manoeuvres in the Dark (“Genetic Engineering”). An energetic burst of music from the band, Bridge Over Troubled Music, is followed by the big finish, Mad Pierrot. The mix of electronic music and oriental sounds makes as much sense here as anywhere, and there’s no denying that the band’s technical execution is impressive. The album ends with the same computer games that began things, suggesting that the whole exercise has been a game. (The US version deletes this last track, Acrobat, and also features a different mix. I haven’t heard the two mixes, but you can compare them on the 2CD reissue.)

A connoisseur of electronic music would tell you that Yellow Magic Orchestra is an early classic, but I draw the line at disco, and this album sounds like electronic disco music to me about half the time. I guess you can pity me my provincial western ears or a troubled soul that prefers Teutonic tone poems to bubbly synthesizer music. YMO sails over my head or breezes past my ears or some combination of the two. I can’t have an opinion about everything, of course, and I’m of the opinion that you should ask for someone else’s where this band is concerned. I know, why even review it then, but fate has set my hand to this Sisyphean task, and so I roll along…