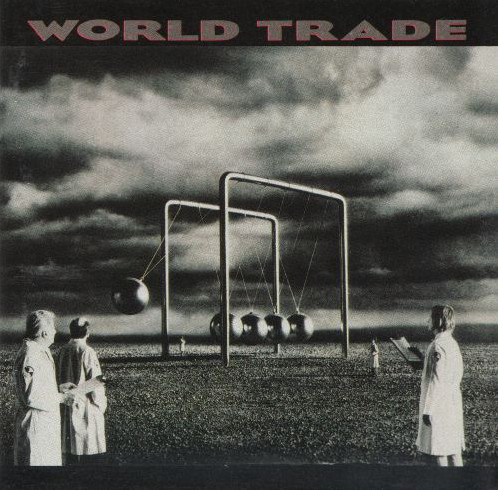 I’ve never had a need for the neo-progessive label because the whole progressive concept (music as artistic expression) depends much more on the individual artist than an individual era. I’ll concede the utility of a “classic progressive rock” label as a means of denoting the early pioneers and the sonic limitations (e.g., 16-track recording, mellotrons, first-gen synthesizers) they faced, but there’s nothing “new” about the idea of making artistically-minded music. Plus, a lot of so-called neo-progressive rock bands grew naturally out of rock and metal, irregardless of prog. Maybe Queensrÿche would have sounded different in the absence of prog pioneers like Pink Floyd, but not Galactic Cowboys. I mention this because World Trade’s first album is widely regarded as one of the better examples of neo-progressive rock. The band is clearly influenced by Rush, Yes and Asia. But they’re also influenced by Toto and hair metal (producer Keith Olsen had recently worked with both Whitesnake and Kingdom Come). The band’s roots are in Las Vegas and Los Angeles, cities known for their superficial art. And there’s no way you could watch the video for “The Revolution Song,” with the band striking sexy poses in moody lighting while industrial fans machines ravished their long hair, and think that you were witnessing the second coming of Camel. What this record really represents is grandiose rock. Now, a lot of classic prog was grandiose—in fact, that was its eventual undoing—but there is a not-so-subtle distinction between a big idea and a big production. Aqualung is a big idea. Journey to the Centre of the Earth is a big production. See the difference?

So let’s forego the neo-prog label for the moment and call this a grandiose rock album. In that sense, it’s infinitely more interesting than Whitesnake, and ultimately less interesting than Rush. The portentous opening instrumental sets the tone, then Billy Sherwood comes bounding in like Jon Anderson’s long-lost brother for the upbeat “The Moment is Here.” It’s a calculated and clever move that will grab the attention of Yes/Rush fans early. “Cant’ Let You Go,” “Life-Time” and “Fight To Win” re-affirm the Yes connection. Sherwood has a good voice and a good ear for a winning melody. You’ll hear that on “One Last Chance,” and every Sherwood album seems to have at least one shoulda-beena hit on it like that. “Open The Door” ends the album on a positive note, and in between there are well-produced numbers that seem to center around the themes of revolution, freedom and love. I’d stop short of calling it a concept album because, so far as I can hear, it isn’t, but the same concepts are at work throughout, so that you could probably string a storyline together if you were so inclined (two broken people with broken dreams meet in a broken world, et cetera). If you enjoyed the processed music of Rush and Yes in the nineties, you’ll enjoy World Trade on nearly as many levels. The quality of the music is outstanding, and if the motive for this momentous-sounding music was partially monetary, neither Rush nor Yes were struggling artists. Whether you see this as neo-prog or just the next wave of hard rock, it’s clearly superior to whatever the reconstituted Asia was cranking out.