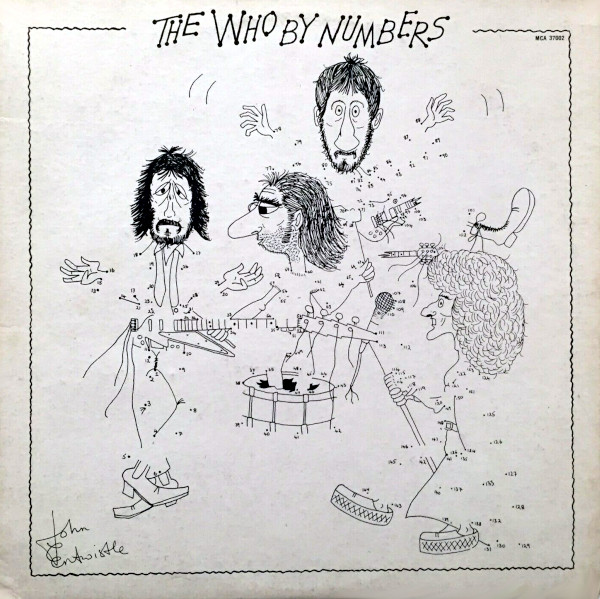 Rarely numbered among The Who’s best albums, this is sort of Pete’s mid-life crisis set to music.

Kronomyth 11.0: Where the past is a hero and the present a queen.

After the full-frontal attack of Tommy, Who’s Next and Quadrophenia, The Who By Numbers felt like a retreat. The best song on it, “Slip Kid,” was a holdover from Lifehouse. The rest of the record suggests the introspective moments from their last few albums, strung together. Instead of anthems of teen angst, fans were treated to the bitter dregs of Pete Townshend’s middle-aged musings: “Dreaming From The Waist,” “How Many Friends,” “However Much I Booze.” The Who By Numbers isn’t a bad record, the band being plainly incapable of making one, but it is the weakest of their classic albums.

Townshend sounded like a man in the middle of a nervous breakdown, and The Who couldn’t offer him much more than musical support. Keith Moon continues to drum like a man on fire, John Entwistle pushes back against the upstarts on “Success Story” and Roger Daltrey sings the songs with enough passion, but there’s no getting around Pete’s blue mood. In its defense, The Who By Numbers does feel like Pete’s most personal album yet, partly because he sings lead vocals on two tracks (“Red Blue And Grey,” “However Much I Booze”) and partly because it is so personal. There’s no Tommy or Jimmy to stand as a proxy; it may be Daltrey singing on “Dreaming From The Waist,” but it’s Townshend talking.

Over the years, I’ve warmed up to a lot of these tracks, as many Who fans probably have. “Slip Kid” is brilliant, “Squeeze Box” is good not-so-clean fun and the succession of “They Are All In Love,” “Blue Red And Grey” and “How Many Friends” is pure genius. Telling you that The Who By Numbers is a disappointment is like telling you that Led Zeppelin’s Presence is a disappointment; it’s still better than ninety-nine percent of everything else out there.

The other thing you’ll notice about The Who By Numbers is that it isn’t as heavy an album as their other works. For the loudest band in the world, they’re surprisingly quiet most of the time. It’s not quite The Who Unplugged, but there is a lot of acoustic guitar on this record. “Slip Kid” is a fist to the face, “Squeeze Box” is more of a playful tickle, and that’s about it; The Who have their hands in their pockets for the rest of the way, except of course for “In A Hand Or A Face.” Tellingly, the band took a bit of time off before releasing their next album, the in-all-ways-superior Who Are You. Fans will definitely want to add The Who By Numbers to their collection at some point, but neophytes had best steer clear until they have a few of the undisputed heavyweights (Who’s Next, Who Are You, Tommy, Quadrophenia) under their belt.

All selections written by Pete Townshend unless noted.