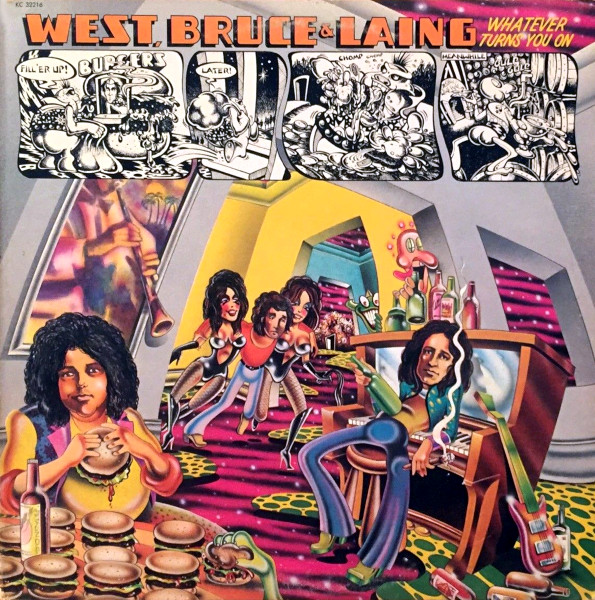 The trio’s second album attempts to blend their musical styles together, but it stills feels like they’re making a molehill out of Mountain.

I wasn’t expecting the first WBL album, let alone a second. But I’m not one to look a gift horse in the mouth. Whatever Turns You On continues the unusual experiment of blending the divergent styles of Leslie West and Jack Bruce. If would be nice if some record company did listeners the kindness of giving both records a good remaster and putting them on a single disc.

Andy Johns again co-produced the effort and, as others have pointed out, he fails to rein in the band’s tendencies toward excess (although, if the album artwork is any indication, he had his work cut out for him). At this point, Jack Bruce was probably a mess, with WBL a place to hang his musical hat as addict in residence. Bruce does manage to contribute one interesting song at the end, the abstruse “Like A Plate,” and does a fine impression of Neil Young on “November Song.” There are also several spots where it appears Bruce contributed musical ideas to West’s songs, lending some credence to the group songwriting credits.

The ocelot’s share of the credit belongs to Leslie West, however, who sings most of the lead vocals and plays both rhythm and lead guitar (through multitracking). West’s “Token” and “Sifting Sand” (both of which feature the aforementioned touches of Bruce) are two of the highlights on Whatever Turns You On. The opening “Backfire” and, in the UK, “Dirty Shoes” were selected as the album singles; the latter seems a questionable move, since it’s one of the least interesting songs on here. It’s also one of the places on the album where Andy Johns unsuccessfully segues from one idea to another; there are several missteps like that on the record.

In my opinion, the first WBL record is the better effort from Bruce, while West looms larger on the second. Corky Laing is what he is: a good drummer sandwiched between two great musicians. On “Token” and “Like A Plate,” Laing begins to break out, although he’s still bland compared to Ginger Baker (a comparison that would favor few, of course). Whatever Turns You On isn’t good enough to make me deeply lament the dissolution of WBL. It is, however, a solid chapter in the continuing story of Leslie West, a man who (like Jack Bruce) was a singular talent, even when he was playing in a group.