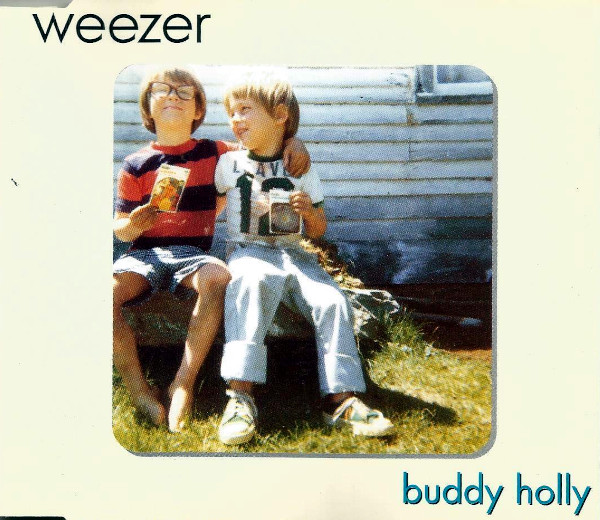 A song so good that Microsoft decided to use it for global mind control. Conspiracy theorists, discuss among yourselves.

I’ll admit it, I’ve probably watched the video for Buddy Holly like 200 times. Which is probably 100 more times than I’ve watched Nirvana’s video for “In Bloom.” So that’s like, what, 15 hours of my life? Totally worth it.

Both videos won the MTV award for Best Alternative Video; Nirvana in 1993, Weezer in 1995. The theme is the same: punk group transplanted into the past as ubernerds. Director Spike Jonze spiced up the idea by adding Happy Days to the mix. (Extra cool points for you if you remember the Happy Days board game.)

You never forget the first time you fall in love with Weezer, and for most people it was “Buddy Holly.” The video was everywhere, literally. Microsoft even included it with copies of the Windows 95 operating system. It’s a great song, great video, great time to be alive to hear it told today. Oddly, for all its overpromotion, the song was never released as a formal single in the US. Billboard still tracked it on various charts, but I don’t pay any attention to those. They got a little too chart-happy there for a while: I felt they should have stopped at the Soul chart.

In the UK, “Buddy Holly” got the full single treatment: seven-inch, cassette, compact disc. These included Jamie, a song that originally appeared on a Geffen rarities compilation, and two live performances. “Jamie” (pronounced jammie) is okay, but I’m pretty sure Rivers Cuomo could whip out a song like that in ten minutes. The live versions of “My Name Is Jonas” and “Surf Wax America” stick close to the originals, which is what pop bands are supposed to do.