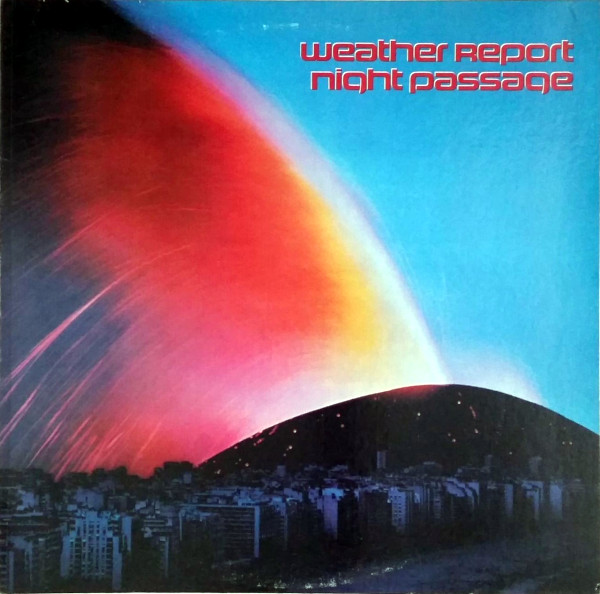 This is the first Weather Report album that didn’t floor me, which means it’s probably over my head.

Kronomyth 10.0: An unremarkable album you made.

Up until now, I didn’t think Weather Report were capable of making an unremarkable album. Turns out they’re plenty capable. Night Passage is the first Weather Report album you may want to pass on. Mr. Gone, now that’s an underrated album. This one is just underinspired or underplayed or something clever beginning with the word “under.” Underserving of your time and money; that’ll work as a placeholder for now.

Let me start with the positives first. Three Views of a Secret, the lone composition from Jaco Pastorius, is a fantastic mix of light and dark elements. It has a memorable melody, nice soloing from Wayne Shorter (which I’ll talk more about shortly) and some explosive drumming from Peter Erskine. The closing Madagascar from Zawinul is also intriguing: a mix of atmospheric synthesizers and a swinging rhythm section that holds your interest for 10 minutes. If they had inverted the track listing back to front, I probably would have liked this album better.

Now, for the whining. The opening Night Passage is the least engaging introduction to a Weather Report album since forever. I didn’t want “The Pursuit of the Woman with the Feather Hat” to end, it was so alien and intriguing. I kept waiting for “Night Passage” to start. It just sounded so arbitrary, as though the band were improvising until something clicked, but with no click forthcoming. Dream Clock is better, if only for Shorter’s saxophone. A ballad, it leans on Jaco’s bass at first, but it’s Shorter who rescues it with one of his many soulful solos on this record. I was prepared to hear Shorter recede further into the background on this album; instead, he’s the one member who seems to consistently step forward. Forlorn reminds of Frank Zappa’s synclavier experiments, which is not a compliment.

The idea of updating a Duke Ellington song could have been a fun diversion. Unfortunately, Rockin’ in Rhythm is a Frankenstein’s monster of sped-up synthesizer jazz that sounds like it was recorded at the wrong speed. Fast City sums up a lot of this record: in a hurry to go nowhere. I realize that the world doesn’t need one more opinionated desk jockey turning their nose up at music that’s probably two feet over their head. Heaven knows I don’t want to be that guy. But I calls ‘em as I see ‘em, and I don’t see where four brilliant musicians plus one percussionist I’ve never heard of before equals this album.

I honestly don’t understand why this record isn’t better. It’s inconceivable that Zawinul, the anchor of Weather Report, would become the weak link in the chain. Yet the synthesizer sound choices are poor, the playing is stiff and unnatural. To my ears, that is. Zawinul and the band obviously heard something different. More than likely, the band had simply moved beyond the past, while I stayed stuck in it. I didn’t really care for the last side of 8:30 either, and I’m not legally bound to like every Weather Report album, but I’d like to, so I’ll return to Night Passage until it finally does click.

Funny thing: I somehow forgot to mention Shorter’s Port of Entry, so I went black to listen to it again and the staccato funk of it blew me away. The small crowd of 250 — this album was performed in front of a live audience, another point I failed to make the first time — really got into it and reminded me that Night Passage is missing the visual component that brought much of this music to life. Maybe the disconnect here is that Weather Report’s music lost some of its vital energy in the passage from stage to stereo speakers.