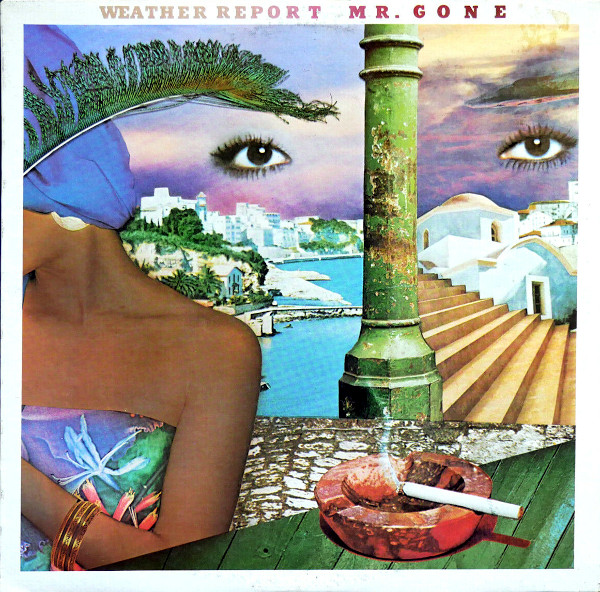 Z and the machines take over, propelling the band to new experimental heights—and leaving most fans and critics behind.

Kronomyth 8.0: A change in the weather, a chilly reception.

In what appears to have been a silent coup, Joe Zawinul and his synthesizers assumed control over Weather Report, with the band’s remaining core of Z, Wayne Shorter and Jaco Pastorius splintering into three different musical factions. Jaco and Shorter are often inaudible on the album. The band’s revolving drum chair was no longer just a recurring joke but an area of real concern. And yet, despite all this, Mr. Gone is every bit as much a work of genius as the band’s last two albums.

I realize I’m in the minority here. Things haven’t exactly gone smoothly for Mr. Gone in critical circles ever since Downbeat, until now one of the band’s staunchest supporters, gave the album one star. And I understand some of their frustration. Mr. Gone is a very modern and mechanical record. Jaco and Shorter feel like occasional contributors. The drumming is boring most of the time. (Peter Erskine’s performance on Pinnochio is a notable exception.) But I don’t know how you can listen to a song like The Pursuit of the Woman with the Feathered Hat and not get chills.

The opening track, for me, opened up a whole new world of sound. The complex, intertwined patterns of electronics and percussion are intoxicating, to the extent that I didn’t even notice if and when Jaco and Shorter entered the scene. River People is equally modern and edgy, this time with Jaco on electronic drums (one of several tracks on the album where he doubles on drums). Jaco’s distinctive bass takes its time before emerging, Shorter’s saxophone hides behind clouds of synthesizers, but the arrangement is again breathtaking. Young and Fine is as joyous as anything you’ll encounter on the band’s last two albums, a classic in the making with Z, J and S bringing their A game. Side one closes with Shorter’s otherworldly tango, The Elders, featuring the strangely strummed bass of Jaco.

Mr. Gone continues the album’s otherworldly journey, this time into the realm of science fiction and synthesizers. At its core is a basic jazz riff, and there are no doubt many who cringed to hear Jaco essentially replaced with an Oberheim bass walk, but it’s an impressive effort even if it’s Z doing most of the work. Punk Jazz delivers the fix of hyperkinetic bass playing that Jaco’s fans were waiting for, again with a really complex arrangement behind it. Pastorius, credited with arrangements on his two tracks, does a brilliant job on both, although I suspect he had a little help from Z. The noisy “Pinnochio” provides another blast of energy, the storm before the calm of And Then. Here, Weather Report writes an actual song with words, no doubt heresy to some. For me, however, the song is a clear indication of why Weather Report, and not Return to Forever, was the greatest standing fusion band, since nothing on Secret Agent sounded this good.

What I hear on Mr. Gone is an experimental record from a band that had perfected its formula on Black Market and Heavy Weather. The group wasn’t disintegrating so much as disaggregating, with Zawinul further establishing his role as the band’s chief visionary, Pastorius asserting his place as revolutionary-in-residence and Shorter increasingly becoming the elder statesman in absentia—the Lenin, Stalin and Trotsky trio of popular jazz. Audiences weren’t interested in new musical manifestoes, however; they wanted the familiar comforts of the past. In my (increasingly unpopular) opinion, Mr. Gone stands with Weather Report’s last two records as a triumphant triumvirate of jazz fusion from the mid-to-late 70s. Call it a case of flying higher and falling apart at the same time, that the band reaches new heights on this record is unmistakable to me.