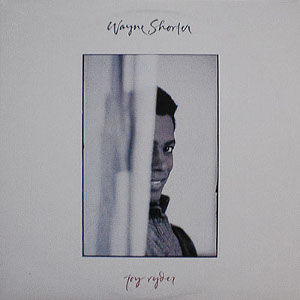 You know, these Wayne Shorter albums are more trouble than they’re worth. The tantalizing traces of Weather Report hold my attention initially, but then I start drifting off and, by the time the song is over, I’ve forgotten everything that came before it. So I go back and listen to it again, telling myself that this time I’m really going to pay attention, and the same thing happens. I had a similar experience with Atlantis. In fact, I had to listen to Atlantis again just to compare it to Joy Ryder, since I’d completely forgotten what that album sounded like. By the time Atlantis was over, Joy Ryder seemed a distant memory, so back it went on the turntable, ad infinitum. Both albums have songs that I enjoy each time I hear them, in this case “Joy Ryder” and the vaguely Oriental “Cathay.” Just to make sure it wasn’t a case of reaching a Shorter saturation point, I tried listening to side two first. “Joy Ryder” and “Cathay” still came out on top (and the languid processional “Causeways” simply doesn’t make for a strong opening track). Though the players have changed since Atlantis, the instrumentation stays about the same (a carryover from the bass/drums/keyboard/synth sound of Weather Report). Shorter isn’t a flashy soloist by design on Joy Ryder, moving into the background much as Miles Davis had done at this stage in his career, his presence felt primarily in guiding commentary and countermelodic lines that underscore some new wrinkle in the arrangement. There are still moments when he flashes his superlative skill, as on “Over Shadow Hill Way” (which I’m listening to right now and will invariably forget in five minutes), but Shorter the arranger/leader is interested in hearing the music from the talented group he’s assembled, and Shorter the saxophonist doesn’t care if he blows you away with a solo or not. If I give this album a slight nod over Atlantis right now, I reserve the right to withdraw it when Joy Ryder is over. It does strike me as less lyrical and more angular than I expected, perhaps a better companion to the Weather Report story for its edginess and modernism, but lacking the highpoint of a swingout section like “The Last Silk Hat.” And, yes, I had to put that song on again just to remind myself.

All songs composed by Wayne Shorter unless noted.

The Plastic
Released in 1988 on elpee in the US (Columbia, FC 44110) and in the UK (CBS, 460678), and reached #24 on the US Top Contemporary Jazz Albums chart. Victoria Pearson photographed the cover (note that Shorter is again obscured), Judi Siskind did the lettering, Tony Lane and Nancy Donald are credited with art direction, and Wayne Shorter drew a picture of a giant vagina on the back cover because you can do that when it’s your album.