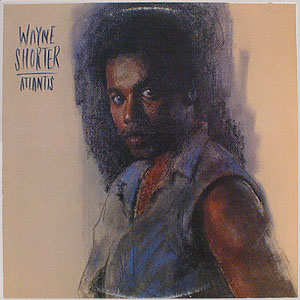 Invariably stacked alongside the magnificent bounties of Miles Davis and Weather Report, and ultimately found wanting. There are percolating and purposeful rhythms, swinging melodies delivered in terse bursts from Shorter, but anyone looking for a lost continent of fusion-fueled fantasies won’t find them on the smooth shores of Atlantis. I’ve listened to this album (I mean, really listened) on more than a dozen occasions over the years, slipped it into the background mix a dozen more, and it has yet to leave a treasured keepsake behind. There are ephemeral charms, like the graceful gait of “The Three Marias” and the slightly subversive riffs found on “The Last Silk Hat” and “Criancas,” but they’re drab animals compared to the colorful creatures that stalked Weather Report’s wide veldts. Of course, Shorter’s compositions with Weather Report never spoke to me the way that the songs of Zawinul and Jaco Pastorius did, my tastes usually running to the left of the lyrical. Without those creative foils, the saxophonist does replicate some of the original oddness on his own, but he seems more at home when the pace is less frenetic and the melody allowed to linger. The backing band is predictably solid, including a pair of very capable pianists I was heretofore unfamiliar with, Yaron Gershovsky and Michiko Hill. Alejandro Acuna (a Weather-mate) and Larry Klein hold down the rhythm without much fuss, flautist Jim Walker slips in and out of the music while lending Shorter’s sax lines an added dimension. From the perspective of Miles or Weather Report, the level of musicianship is merely adequate, good citizens behaving with due deference in this province of the Reeded Son. Vocals also play a role in the music, in the case of “Atlantis” raising Chick Corea as a reference point. The fact remains that I’d pack relatively few jazz albums in my desert island excursion, and Atlantis would simply have to be left behind in the interest of economy. You, on the other hand, might have room for a suitcase full of the stuff, in which case Atlantis might be a nice change of clothes when the Weather Report runs dry.

The Pictures
The portrait for the album cover was painted by Billy Dee “This deal is getting worse all the time” Williams.