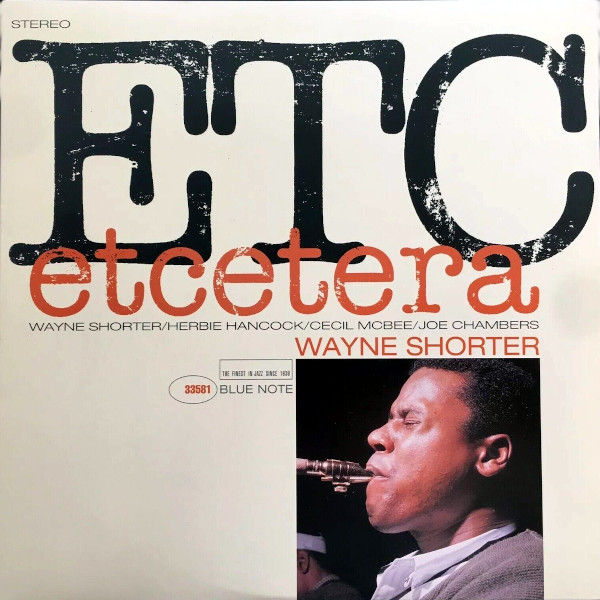 There are days when I’m convinced the United States hasn’t contributed anything to the world except for jazz and a few good books of poetry. Where the former is concerned, we can boast an embarrassment of riches, as evidenced by this unreleased session from the 60s featuring Wayne Shorter, Herbie Hancock, Joe Chambers and Cecil McBee. Recorded in the summer of 1965 (six months after the stunning Speak No Evil), Etcetera is the only of Shorter’s Blue Note recordings to feature McBee on bass. The session is otherwise notable for an energized reading of Gil Evans’ “Barracudas” and four Shorter originals including “Indian Song” and the title track.

In the company of the official Blue Note releases, Etcetera falls somewhere beside and perhaps slightly below Adam’s Apple. It’s not as adventurous as the concept albums (Juju, Evil, Eye) nor as meticulously crafted. What’s here are some very solid ideas (“Etcetera,” “Penelope”), but those looking for a showcase of Shorter’s talents may be disappointed. Miles could get away with being understated or even invisible. Shorter doesn’t have that kind of gravitas (yet), and I kept wishing for the saturated sound of a quintet or for Shorter to simply show up with a spectacular solo. Instead, Hancock emerges as the lead soloist on this session.

While the playing on here is of too high a caliber to languish in an archival vault, you can understand why Blue Note waited to release it. This isn’t the meticulous Wayne Shorter who scored everything note by note, or the perfect meshing of movable parts built by master machinists. The songs on Etcetera lack the lived-in feel that more time or familiarity might have given them. Considering the amount of talent present plus the ratio of Shorter’s Blue Note recordings relative to the interest in them, many will find this nigh irresistible and will be rewarded accordingly. It is not, however, a lost treasure, but rather an artful addendum. [Note that most of this material appeared on the earlier Japanese (and later US) release, The Collector.]