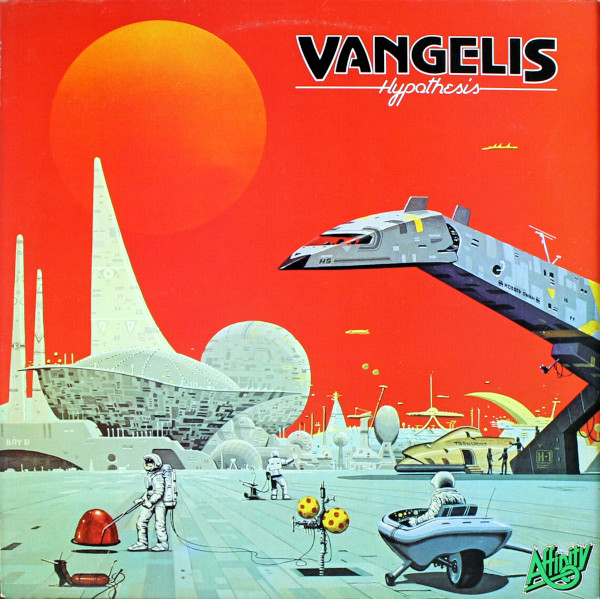 An improvisational jazz-rock jam recording from 1971 that finds Vangelis going around in Circle.

I’m a sucker for a discount. And so it was that, thumbing through Record World’s bins in the early 80s, I brought home two discounted import records from Vangelis: Hypothesis and The Dragon. Both featured cool album covers and the kind of lineup (keyboards, bass, drums, violin) that promised sonic adventure. Neither delivered on that promise, unfortunately, as I soon discovered both albums were the products of a loosely planned jam session recorded in 1971 that went wisely ignored until someone realized that repackaging them might turn a profit. That someone, by the way, never bothered to get the permission of the artist himself, and Vangelis eventually succeeded in having the recordings blocked.

Honestly, the story behind how these recordings were released is more interesting than the recordings themselves. To hear it told today, Vangelis was looking to experiment in a jazz-rock idiom (think Circle or Soft Machine) and Giorgio Gomelsky recommended Oxley and Odgers, whom Gomelsky had worked with before (see John McLaughlin’s Extrapolation). The original idea was that this spontaneous collaboration might produce music that could be mixed and polished into something that people would actually pay money to hear. In reality, it was mostly a jumbled mess of keyboards, bass and drums that clicks only occasionally, briefly and finds Vangelis experimenting with some dark sci-fi sounds that recall Keith Emerson at his most sinister.

You don’t need to hear Hypothesis or The Dragon unless the idea of Vangelis creating free jazz in the early Seventies is too intriguing to ignore. And that may be the case. Vangelis fans are a curious lot by nature, and I wouldn’t tell you that Beaubourg is a demonstrably better record than Hypothesis. Listening to Vangelis reach beyond his comfort zone isn’t a completely joyless exercise, unlike some of those early Circle recordings. That said, Oxley is no Barry Altschul, Odgers is no Dave Holland and Michel Ripoche’s contributions are contained to the last five minutes of Hypothesis – Part 2. In other words, Vangelis is the lone draw here. That’s not meant as a slight to the other players—Odgers and Oxley sounded just fine on Extrapolation—I just don’t think they were given enough direction.

Like a weed, these recordings cropped up again in the 21st century as a 2-for-1 reissue on compact disc, which is probably the best way to purchase them, provided you don’t mind putting money into the hands of criminals and profiteers—which, given the robust growth of the stock market and cryptocurrencies, I’m assuming you don’t.