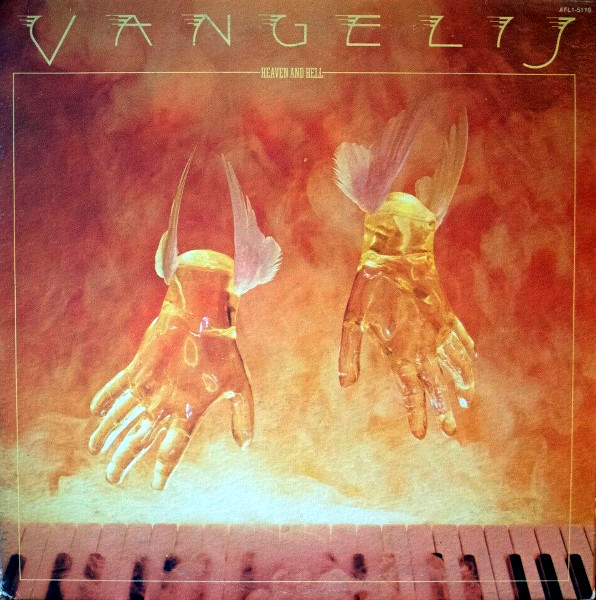 Vangelis enters the ranks of modern classical composers with this musical battle between good and evil.

The first “serious” work from Vangelis, Heaven and Hell is an ambitious undertaking that employs a small army of synthesizers, percussive instruments and singers to create a kind of modern-day Carmina Burana for the electronic age. At least that’s always been my operative reference point, although there are also elements of space music (Tangerine Dream) and progressive rock (Emerson, Lake & Palmer) at work here as well. On closer inspection, Heaven and Hell is stitched together from different songs, and it’s never been clear to me whether any linear storytelling is involved in the succession of, say, “Intestinal Bat” to “Needles & Bones,” so I’d stop short of calling the album a tone poem like Phaedra. But it is an impressive body of work that builds upon itself so that, at album’s end, you feel as though you’ve been on an important journey with Vangelis.

Heaven and Hell enjoyed something of a second life when the 3rd Movement was used as the theme for the PBS series, Cosmos. The album was re-issued to capitalize on the success of the series, and thus became one of the more likely Vangelis albums you would encounter in a record store in the United States. Initially, however, Vangelis was not well-known to American audiences, and Heaven and Hell had little impact on American music. The same could be said of Tangerine Dream. Time has shown us the error of our ways, and today this album is rightly regarded as an early classic in the electronic canon for its ingenious mixture of electronic and classical sounds.

A review of the first side

It would be tempting to divide this album into two halves—heaven and hell—but the album works out rather as a struggle between good and evil. Thus you’ll find violent and peaceful sections juxtaposed on the same side. The opening Bacchanale is a great statement of purpose, as Vangelis builds upon a simple theme to conjure the very image of chaos, showing himself to be a virtual one-man band of demons. The music then settles into a more traditional classical structure, eventually giving way to the soothing sounds of 3rd Movement. It’s here that Vangelis arrives at what would become a signature sound and a signature theme throughout his career, re-appearing years later as the theme to Chariots of Fire, one of the most well-known pieces of music from the twentieth century. The first side closes with a meeting of Vangelis and Jon Anderson, So Long Ago, So Clear, that delivers on the promise of such a tantalizing pairing more than any of their subsequent collaborations. While Vangelis working within Yes’ established idiom would have been a bad idea for both artists, this song does make you wish that Vangelis had been onboard for Anderson’s Olias of Sunhillow.

A review of the second side

The second side starts with the scariest music yet, Intestinal Bat, which recalls the imagery of Dante Alighieri’s Satan, frozen at midriff with giant bat-like wings. This piece, more than any other, evokes comparisons to Tangerine Dream. But where TD would have kept tunneling deeper, Vangelis quickly dispels the darkness with the playful Needles & Bones. The darkness returns on 12 O’Clock, with a strangled choir of female voices. It’s one of several places on Heaven and Hell where I’m reminded of Carmina Burana. Fritz Kriesler also comes to mind with Vangelis in the way he uses sounds and rhythms in a shorter song format, although you have to pity me my paucity of classical analogies. Moving back into the more comfortable (for me) prog sphere, Aries reminds me of ELP’s “Jerusalem.” The album closes with A Way, a triumphant procession where good marches over evil, or something like that.

Vangelis would increasingly rely on electronics as his musical voice of choice. Heaven and Hell is a vision of his music rendered in electronics, chorus and percussion; something of a throwback to the analog origins of electronica. It’s also one of his most ambitious creations, summoning angels and devils in a musical work of truly classical proportions. In fact, if you were going to make the case for Vangelis as a modern classical composer, this would probably be exhibit A.