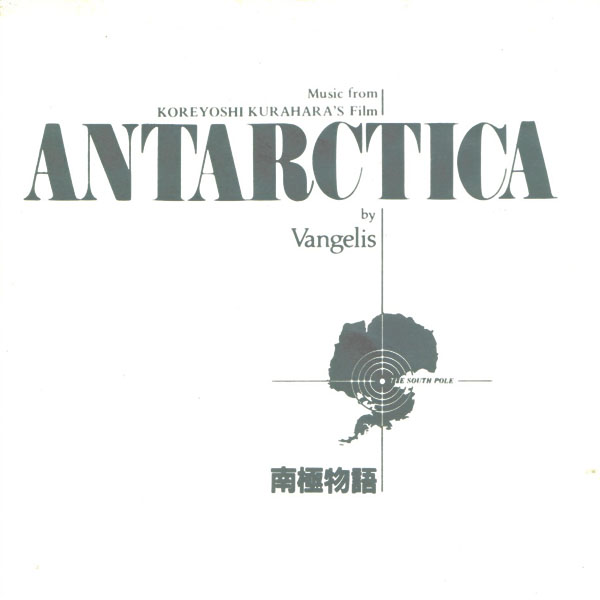 Maybe not as out of this world as Eno’s Apollo mission, this is still pretty cool.

Working within the same idiom as China and Chariots of Fire, Vangelis released this score to the Koreyoshi Kurahara film, Antarctica. As was increasingly the case with Vangelis’ film music, the work stands on its own as a composition of modern (i.e., electronic) classical music – and history may forget that it was ever anything else. The opening theme introduces the primary colors from which Vangelis paints Antarctica: wide swaths of infinite white and gray, oriental strings and flutes, cymbal crashes and tympani, all re-created on synthesizer.

Many of the same elements appeared on the earlier Chariots, China and even Blade Runner (though the latter featured a piercing, mournful sound not present here). The new wrinkle in this white onion is the presence of pop melodies found in the low tympani notes, which will be familiar to fans of Jon & Vangelis (should such an animal exist…). Although the opening Theme is promising, it’s the second theme introduced on “Antarctic Echoes” that defines the album, appearing again on “Song of White” and briefly on “Memory of Antarctica.”

Vangelis has perfected a style of composition where one or two motifs, often resembling a lullaby, are stitched into the larger canvas at intervals. The result is a tying together of sometimes seemingly amorphous works, an om-coming of sorts. Among his film scores, listeners may find Antarctica the closest to a self-sustaining world of music. As an artist who has shown an affinity for the cold and remote reaches of space, Antarctica is a natural setting for his talents. It’s not all glacial pacing and icy sounds; you’ll find animals at play in “Life of Antarctica” and a new day rising to dispel the dark shadows on “Deliverance.” What mostly emerges, though, is an alien landscape of extremes where images are frozen in blue, white and silver, as foreign as the Orient was to early Western explorers and possessing a sensible emptiness second only to space.

Composed and arranged by Vangelis.

Sleeve by Vangelis and Alwyn Clayden.