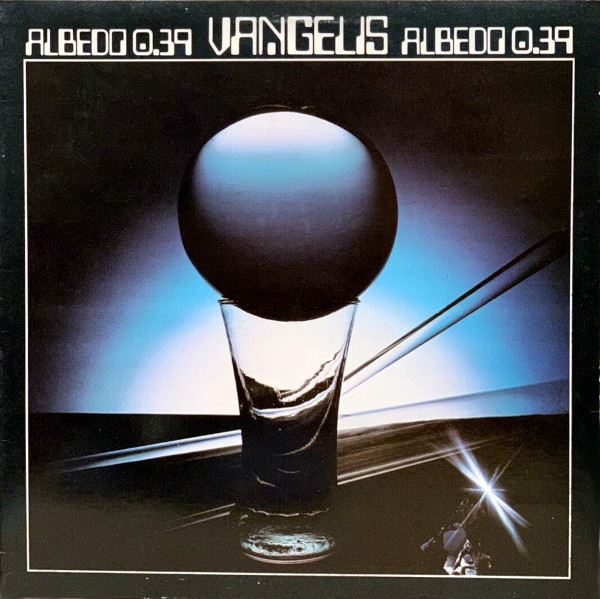 The epic battle of good and evil over, Vangelis goes into space, never to return.

Vangelis stepped away from the Greek tragedy of Heaven and Hell and stepped into his synthesizer space suit for the streamlined, futuristic Albedo 0.39. The two records, though very different, vie for the title of “best Vangelis album” by most accounts. These things being a matter of taste and circumstance, I would simply say that Albedo 0.39 cements the notion that Vangelis had entered the rarefied air of the celestial.

It would be unfair to imply that Vangelis consciously imitated the sound of Tangerine Dream with this album. Rather, their two paths intersected in the pursuit of science-fiction music. TD’s music was a confluence of three composers. The music of Vangelis is accretive; it builds over time with carefully selected sounds (synthesizers, percussion) until the listener is surrounded by a new world of music. The engineering on this album places sounds in exactly the right place with crystal clarity and should have earned Keith Spencer-Allen (who also provides the voice of Albedo 0.39) a Grammy nomination.

Albedo 0.39 is structured around the concept of space music drawn from physical/astronomical properties. The title track, for example, is based on the earth’s refractive properties. Pulstar is a type of neutron star that emits pulsing waves of radiation. The song begins with a pulsing synthesizer and gradually builds, eventually introducing a heroic theme (a device that will be familiar to TD fans). At the time, “Pulstar” sounded like the future, and its sophisticated use of electronics still resonates with listeners today. Freefall uses vaguely Oriental tones in a mesmerizing arrangement that feels like a song without words. It’s at times like this that I wish Yes had hired Vangelis. Mare Tranquillitatis takes a darker turn, with voices from the Apollo space mission that will remind listeners of 2001: A Space Odyssey. Main Sequence plays out like a movie inside the composer’s head, a mechanistic and avant-garde overture that starts out agitated and ends in a cool wash of sounds. The short Sword of Orion closes out the first side of music, a continuation of the calmness with which “Main Sequence” concluded.

Side two begins with another succinct and accessible track, Alpha. Vangelis again builds a sense of anticipation and then paints his simple, engaging theme over a broad canvas of stars. The two-part Nucleogenesis is the album’s largest work, though arguably its least effective. It feels improvised in spots (Vangelis navigated more by feel than a fixed compass) and features a wide range of sounds and styles, but never comes together as a cohesive whole. TD, frankly, was a better painter of musical murals. The record’s final statement is a clever fusion of science fiction and synthesizers, as Spencer-Allen calmly reads physical properties of the earth against a soothing electronic backdrop.

At the time of its release, Albedo 0.39 was one of the most successful attempts at making space music for the future. Little else on the musical landscape sounded like it, and few composers took to electronics so warmly as Vangelis. Spiral more or less repeats the exercise, if memory serves, but you never forget the first time, and Albedo 0.39 is the first time that Vangelis spoke to us in the language of the cosmos.

All songs composed and arranged by Vangelis.