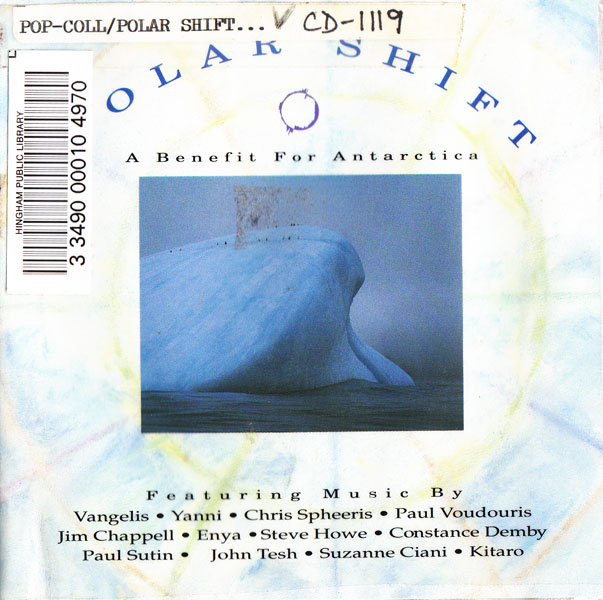 New age music to save the whales, the penguins and the seals (so they can keep raping/eating the penguins). Hooray for nature!

Real Music owner Terence Yallop (a pioneer in new age music) and producer/radio show host Anna Turner assembled a compilation of prominent new age artists to raise awareness of Antarctica and benefit the Cousteau Society, entitled Polar Shift. The impetus, apparently, was the imminent Antarctica Treaty ratification for environmental protection of the area (it was approved several months after the compilation’s release). Only three of the compilation’s thirteen songs are unique to the compilation, including Yanni’s “Song For Antarctica,” Constance Demby’s “Into Forever” and a collaboration between Demby, Paul Sutin and Steve Howe, “Polar Flight.” The remainder is borrowed from existing albums, including two tracks from Vangelis’ 1983 soundtrack, Antarctica.

If you enjoy new age music, you’ll enjoy this sampler. (You’re also a marshmallow. A big, fluffy marshmallow.) If you don’t enjoy new age music, the words “pile of shift” will likely come to mind at some point (say, during the histrionic and anticlimactic “Light of the Spirit”). My only interest in this CD was to hear “Polar Flight” and, as the first of the Sutin/Howe works I’ve heard, it’s pretty good, probably no worse than Rick Wakeman’s Aspirant Sun series.* Of the remaining cuts, “Pura Vida” from Chris Spheeris and Paul Voudouris caught my ear, so I may have to check out more of that. The rest of the artists (Yanni, John Tesh, Enya) left me cold. Those in search of icy tones would do better to seek out the original Antarctica from Vangelis, Mannheim Steamroller’s Fresh Aire IV or The Pearl by Harold Budd and Brian Eno.

*I can now say that this actually is worse than Rick’s Aspirant Series. Sorry, Rick.