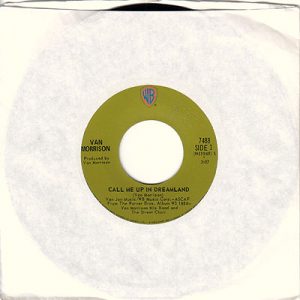 Wake me up when “Call Me Up In Dreamland” is over. The flip side, “Street Choir,” doesn’t do a whole for me either. It sounds as though Van Morrison had adopted the boozy Salvation Army sound of The Band and The Kinks (c. Muswell Hillbillies) for His Street Choir. Compounding the problem is that Morrison is flat-out unintelligible (i.e., he’s got some Joe Cocker-size marbles in his mouth). I like Van Morrison and willingly buy into the whole soulful mystic thing, but the vocal inflections strike me as disingenuous, similar to when Elton John tried to sing country music. Had it not been for “Domino,” I doubt that Dreamland would have been roused from its sleepy quarter and pressed into service as a third single. Today, it’s best forgotten as an album track that pales beside his better singles.

Van Morrison: His Band And The Street Choir (1970)