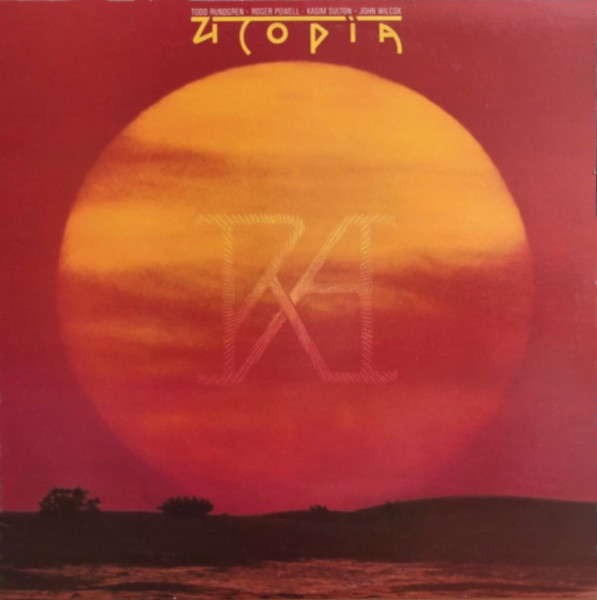 [Kronomyth 3.0]
Enlightenment for a world of fat men and little boys.

Rundgren re-thought the whole Utopia thing, trimming it down to a quartet (adding bassist/vocalist Kasim Sulton in the process) and divining from the band’s edited essence a mix of bombastic rock and Todd’s familiar songcraft. In doing so, Utopia stumbled upon a signature sound in Ra that would be fine-tuned over the years but never really abandoned. Some have suggested that Ra is a concept album, but it’s rather a recurring theme of the sun that gives the impression of a unifying concept; after all, what could a magic theatre, a nuclear bomb and a muse trapped in a glass guitar really have in common? The album starts off with an “Overture” borrowed from Bernard Herrmann (never heard of him, by the way), which is really just a way to get listeners’ ears wet before launching into “Communion With The Sun.” It’s here that we’re introduced to the new Utopian ideal: cosmic chaos compressed into more confining quarters that keeps things moving briskly. The same approach is adopted for “Jealousy” (with its classic claustrophobic sound), “Sunburst Finish” and the overwrought “Hiroshima.” On these tracks, Utopia’s aggressive arrangements and lyrical naivety invite comparison to Blue Oyster Cult (whose “Godzilla” is oddly complementary to “Hiroshima”). These songs tend to define the album, although “Magic Dragon Theatre” points to Todd’s longstanding affection for musicals and the ballad “Eternal Love” likewise looks to the leader’s oeuvre. The only apparent holdover from earlier excesses is the 18-minute “Singring and The Glass Guitar,” which might have been subtitled “The hare who lost his spectacles (and couldn’t see how silly he looked).” Although there are sections of “Singring” that work remarkably well, taken in toto it’s a toppled-over wedding cake. Even with a few flaws, Ra shines brightly in the Utopian landscape as an example of Todd bringing his genius to bear on more ambitious music. As a halfway point between the sometimes sprawling arrangements of earlier Utopia albums and the streamlined pomp of subsequent works, Utopia moves from failed ideal to a workable blueprint.