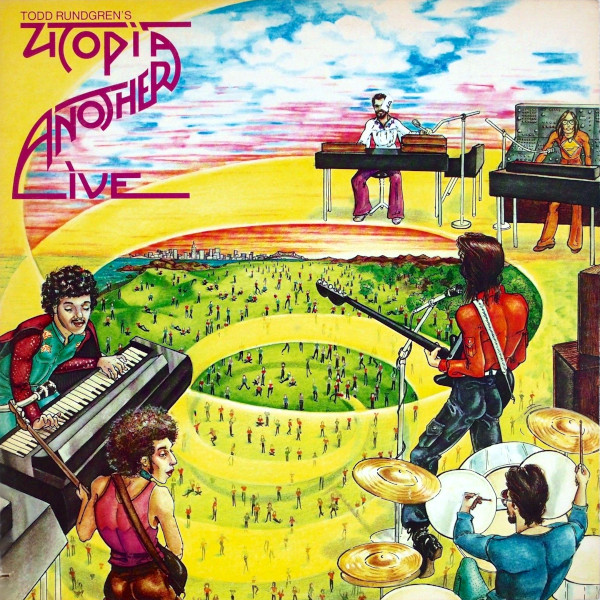 The second Utopia album features new songs, covers and a couple of solo Todd tunes in a live setting.

The second album from Todd Rundgren’s Utopia was, oddly enough, a live record. They didn’t repeat anything from their first record (thank goodness for small favors), instead focusing on a wonderful new trio of songs on the first side, rounding out the second side with a few covers and hits from Todd’s catalog. The two sides are apparently from different venues; the first is remarkably clear (it almost sounds like the studio), the second is sonically challenged.

While it’s an uneven record—and when isn’t a Todd Rundgren affair?—the new music is definitely the high point of Utopia’s first incarnation. It took a few tries, but Rundgren finally seems a match for Frank Zappa’s deft arrangements on the opening “Another Life.” “The Wheel” is mellow by comparison, but fans of his solo work to date will agree that this is a winner. I can’t explain it, but “The Seven Rays” (written by Rundgren and bassist John Siegler) is my favorite Utopia track of all time; it just gets under my skin, musically and lyrically.

The second side is something of a ripoff, since it’s really a Todd Rundgren record. Versions of “Heavy Metal Kids” and “Just One Victory” are in danger of being fuzzy concert curios—you wish they’d cleaned these recordings up a bit. As for the covers of “Something’s Coming” and “Do Ya,” you can hear why they didn’t go to any extraordinary lengths to preserve them—Utopia’s versions are okay, but Yes and ELO (respectively) did these better. Roger Powell’s fans will enjoy his five-minute “Intro/Mister Triscuits,” featuring some nice synthesizer soloing; elsewhere, the multitalented Mr. Powell even plays the trumpet.

Another Live is best viewed as half Utopia and half live Todd, and is indicative of the incestuous nature of the two (see Back to the Bars for more on this). Still, even judged on half an album, Utopia has grown by leaps and bounds from their debut.