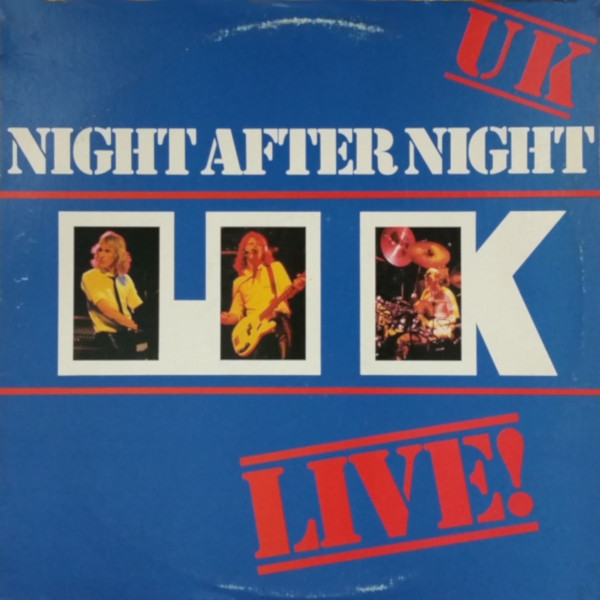 As quickly as it started, it was over, and another supergroup was superseded by individual interests. Night After Night was mixed and released after the band’s final performances in Japan, during the summer of 1979. Included here are two new tracks performed live, “Night After Night” and “As Long As You Want Me Here,” which show a lack of creative chemistry was not UK’s undoing. Perhaps the wonder is that UK lasted at all after the loss of Bruford and Holdsworth, except that Eddie Jobson and Wetton always were the heart of the group.

On this performance, Jobson’s keyboards (and occasional violin) are outstanding, filling in the space so well that he nearly does the work of two musicians (“Alaska” is particularly impressive). John Wetton’s voice is in fine form, delivering the new tracks and “old” favorites like “Rendezvous 6:02” with the right amounts of drama and nuance. Terry Bozzio does a good job on drums, with plenty of double-stroke rolls tripping smoothly over the tom-toms just as they did in Zappa’s employ.

The new material, the clean recording and the lack of anything else from the band conspire to make Night After Night that rare essential live recording. Some listeners have even anointed this their best effort; perhaps overenthusiastic praise, but cheeky product this is not. Given the often redundant nature of live recordings, this one is remarkably relevant.

CD reissue bonus track
10. When Will You Realize?