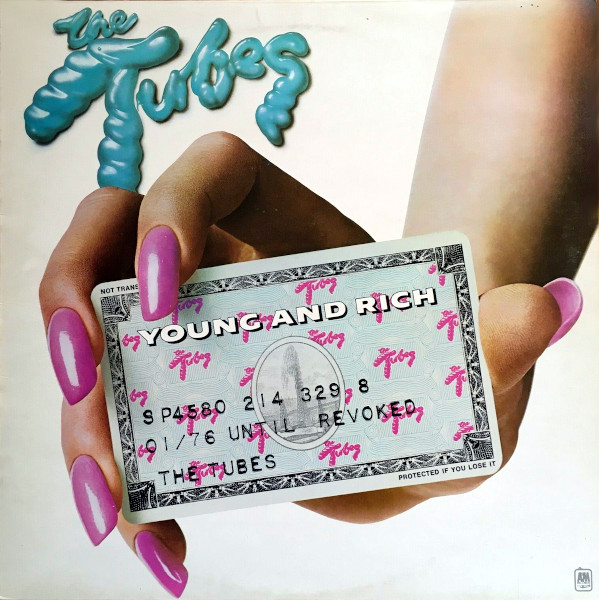 The arrangements are less ambitious this time around, but the band’s bizarre sense of humor and showmanship remain intact.

The zany rock & roll adventures of The Tubes continue on Young And Rich. Featuring a few leftover ideas (“Brighter Day,” “Stand Up And Shout,” “Proud To Be An American”) and a new producer (Ken Scott), their second album puts the band and their instruments front and center, which results in a crisper (if not as conceptually stunning) sound. Had this been their debut album, I suspect I would have simply transferred the superlatives from their first over to here. But, invariably, I find myself comparing Young And Rich to their first record and wondering what the theatrically minded “Pimp,” “Poland Whole/Madam I’m Adam” and “Tubes World Tour” might have sounded like under Al Kooper’s care. Not that Ken Scott’s production isn’t excellent—it’s surprisingly clean and uncluttered, all things considered—but the band comes off sounding like mid-period Frank Zappa (e.g., Zoot Allures) or Utopia (Oops! Wrong Planet), where there first album sounded like a wonderful prog/punk version of Chicago.

It’s still a well-staged album with some memorable cuts, including “Don’t Touch Me There” (a song that could have stepped straight from Rocky Horror Picture Show) and the readymade road extravaganza, “Tubes World Tour.” Some people actually prefer this to their first record; presumably those people who enjoy their silliness with a side order of instrumental soloing, since this album does feature actual guitar and synthesizer solos. Really, the band’s first two records are required listening for fans of Frank Zappa and Utopia, even if Young And Rich does come dangerously close to being a novelty record in the middle (“Don’t Touch Me There,” “Slipped My Disco,” “Proud To Be An American”).

Janet Dornacker went by the stage name of Leila T. Snake. She performed with The Tubes on stage before starting her own band, Leila and The Snakes.