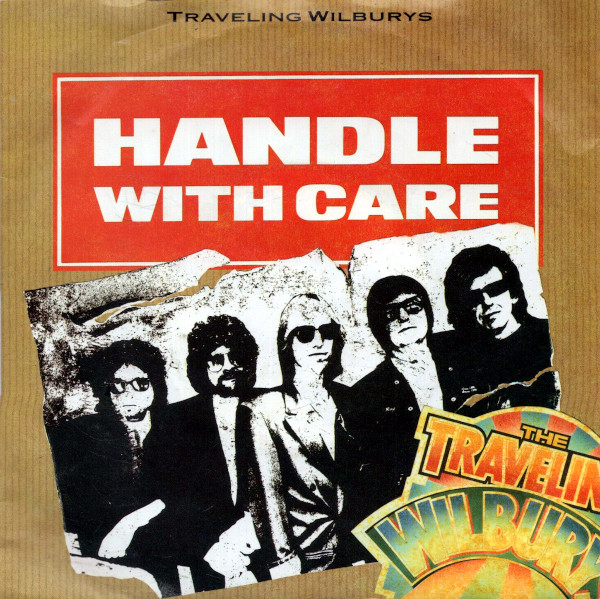 This middle-aged supergroup showed the youngsters how it should be done: with humility and a sense of humor.

Kronomyth 1.1: The freight of the world.

This is the continuing story of Jeff Lynne’s happy-ending machine, which was largely responsible for reviving the careers of George Harrison (Cloud Nine), Roy Orbison (Mystery Girl) and Tom Petty (Full Moon Fever). Music videos played a big role in that revival too, and in the revival of “older” rock stars in general, probably because they were more bankable than younger artists. Petty and Harrison in particular understood the power of visual storytelling, and the video for “Handle With Care” promoted The Traveling Wilburys‘ image as rock legends who had left their egos at the recording studio door.

The song itself was largely an extension of Cloud Nine: shuffling pop music with catchy hooks and just the right amount of studio sparkle. It’s not a perfect song—I would tell you that the combination of Tom Petty and Bob Dylan is downright deadly—but it’s hard to judge it harshly given the amount of goodwill in attendance. The B side, “Margarita,” features claustrophobic production—with Lynne, you tend to get the bad with the good—and gives the vocal leads to Dylan, Lynne and one line to Petty at the end. It’s not a bad song, but synthesizers aren’t their friend. Note that the 12-inch singles featured the extended version of “Handle With Care,” a misguided attempt to make a good thing bigger.

Produced by Otis and Nelson Wilbury; extended version of “Handle With Care” engineered by Richard Dodd.