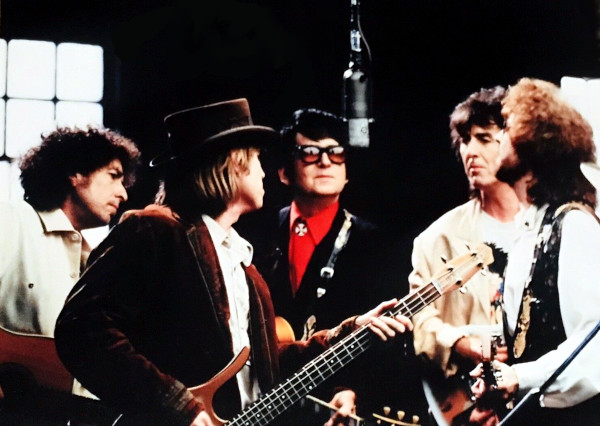 The world’s greatest assemblage of A-list musicians began, believe it or not, as a B side. George Harrison originally recorded “Handle With Care” as the bonus track for the European release of “This Is Love.” When Warner Bros. deemed the song too good for a European-only release, Harrison was left with a great song in need of an album. Through a not-so-simple twist of fate, Jeff Lynne, Roy Orbison, Bob Dylan and Tom Petty each agreed to lend their talents to a new album as the fictional Wilburys, whose name came from an inside joke between Harrison and Lynne regarding the trembling wilburys.

Harrison was the catalyst and the connection that held everything together, but The Traveling Wilburys was very much a democratic process. In most cases, one Wilbury would provide the song’s foundation and the rest would add their own lyrics, each taking a turn at the microphone. The entire album was completed in six weeks, soon surpassing Cloud Nine as a multiplatinum runaway success. “Handle With Care” and “End of the Line” may not have had any deep meaning, but they sure sounded like a lot of fun to make.

Shortly after the release of The Traveling Wilburys, Vol. 1, Roy Orbsion passed away. A video for “End of the Line” was made without him (an empty rocking chair with a guitar appears in his place) and “Not Alone Anymore” stands as a perfect swan song to a storied career. Two years later, the remaining Wilburys released a second, final album, cheekily titled Volume 3.

When all is said and done—and for half of the band, all has been said and done—none of the original players will be remembered for the music of The Traveling Wilburys, yet each will be remembered as a member of what must be the greatest (and humblest) supergroup of all time. Kudos to George in particular; unable to architect a Fab Four reunion, he gave fans a Fab Five that still stands as perhaps the most serendipitous supergroup in musical history.