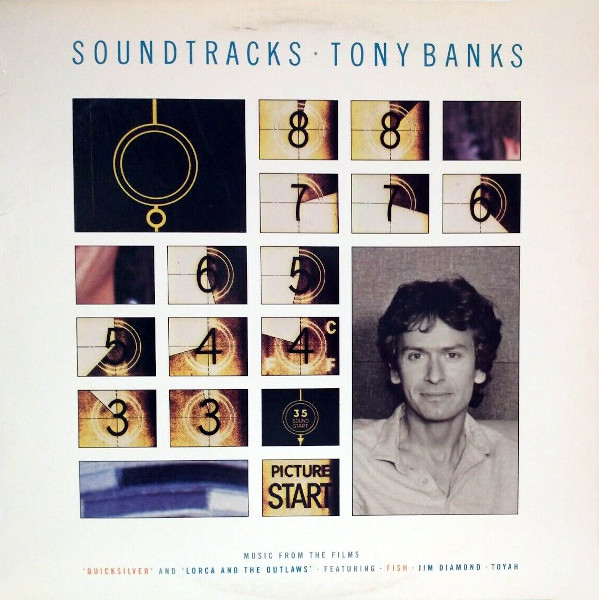 Missed Quicksilver and Lorca and the Outlaws in the theaters? You’re in luck, again.

You don’t need to sell me on the merits of Tony Banks as a musical composer. Unfortunately, he’s never had the good fortune to score a good film. The Wicked Lady was a flop despite some big names, Quicksilver was a cheesy ‘80s movie starring Kevin Bacon as a bike-riding stock broker and Lorca and the Outlaws was, well, you’d just have to see it to understand. Soundtracks collects songs and instrumentals that were used for the last two films, although most of the music for Lorca and the Outlaws didn’t make it into the film. Too bad, since it might have made that movie more watchable.

The highlights here include collaborations with Fish, Short Cut to Somewhere, and Toyah, Lion of Symmetry. The Fish pairing is as good as you’d think, and Toyah’s performance manages to be classy and controversial at the same time. There’s also a song with Jim Diamond, You Call This Victory, which isn’t really well suited to him; he sounds like Tim Finn after a few shots of helium.

The instrumental suites are good, with some pleasant themes (particularly the opening theme on Quicksilver Suite). Of minor interest, the suite was divided into two parts on the official Quicksilver soundtrack, with the second part originally called “Crash Landing” before being changed here to “The Final Chase.” Banks has a distinctive sound, and that distinction is evident throughout this album. Soundtracks isn’t a record I’m as likely to play as The Fugitive or Bankstatement, but Banks’ fans will want to add this to their collection sooner or later. Granted, it took me a bit of time to warm up to it, but it’s been forty years and I’m still warming up to A Curious Feeling.

All songs written by Tony Banks unless noted.

Design by The Clinic.