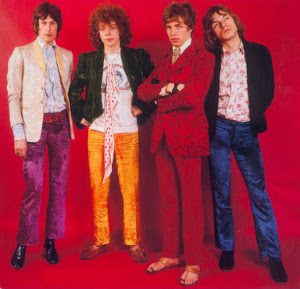 After a brief stint as The In Crowd that nearly landed them a cameo in Michael Antonioni’s Blow Up (a role that eventually went to The Yardbirds), Keith West, Steve Howe, John “Junior” Wood and new drummer Twink (John Adler) re-christened themselves as Tomorrow and threw their hats into the psychedelic scene. With producer Mark Wirtz, the group entered Abbey Road Studios in Spring 1967 (where The Beatles were currently recording Sgt. Peppers Lonely Hearts Club Band) and recorded the songs for their first and only album.

The first fruits of those recording sessions were a pair of singles: “My White Bicycle” b/w “Claramount Lake” and “Revolution” b/w “Three Jolly Little Dwarfs.” Although they didn’t chart, the singles did catch the ear of John Peel as well as another John, Lennon, who praised “My White Bicycle” as an early psychedelic anthem. Unfortunately, the rest of the album wasn’t released until the following year, by which time the psychedelic music scene had already shifted to heavier fare.

At the time of its release, Keith West was the band’s most visible member (particularly after the success of “Excerpt From A Teenage Opera”). Today, Tomorrow is remembered mostly as a footnote in the career of Steve Howe, or by psychedelic artifact hunters who appreciate the album’s (then) high-production values.