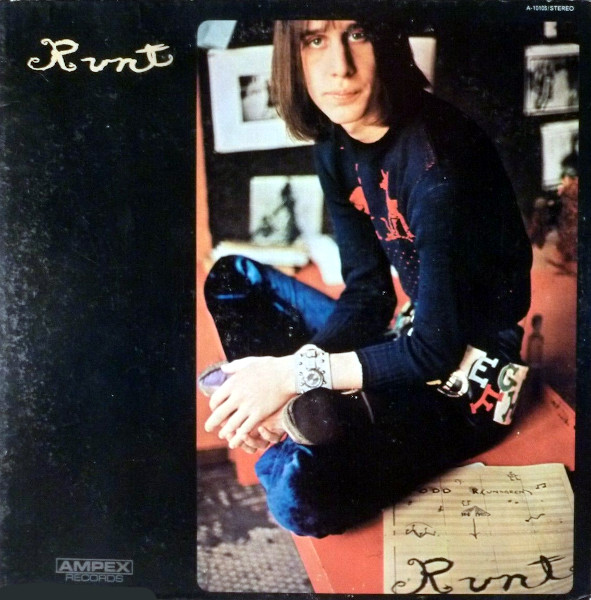 Todd unveils his own tapestry of songcraft with the Sales brothers and scores a minor hit with “We Gotta Get You A Woman.”

Runt established the template for Todd Rundgren albums to come: eclectic songbooks that mixed rockers, ballads and big ideas, stuck together fearlessly with copious amounts of studio wizardry. From this point on, there was no looking back, only forward. The album produced a minor single, “We Got To Get You A Woman,” a likeable if pre-enlightened bit of pop music, which is easily overlooked in favor of gems like “Believe In Me,” “There Are No Words” and the medley of “Baby, Let’s Swing/The Last Thing You Said/Don’t Tie My Hands.”

When Todd seizes on a winning melody, which is most of the time, the results can really get under your skin. I had the same reaction to his next two albums, each of which have a few songs that I’d carry a torch for on any given day. Runt also features some pretty complicated music that points forward to the work of Utopia: “Birthday Carol” covers a wide range of styles over nine minutes, “I’m In The Clique” is edgy stuff.

Despite the rhythm section of Hunt and Tony Sales (who seem to have found their niche playing in make-believe bands), Runt isn’t a group effort in any meaningful sense of the word. This is Todd’s show from the get-go, starring as guitarist, pianist, singer, songwriter, arranger and producer. Runt is not, however, a true DIY album like Something/Anything? either. That Todd was able to achieve the same results on his double-album opus remains one of its magical mysteries. It’s tempting to see this first album as a test run for Something/Anything?, but Runt is bigger than that. It’s a self-standing introduction into the unique musical world of Todd Rundgren that has everything you’ve come to love about him: lump-in-the-throat ballads, clever and catchy melodies, jacked-up rock songs, cool production tricks and the kind of track-by-track anticipation normally reserved for albums by people named Paul (Simon and McCartney) or Harry (Nilsson).

All songs written and arranged by Todd Rundgren.

*Appears twice for timing. And because it’s awesome.

Todd Rundgren (all instruments and voices except where indicated), Hunt Sales (drums, percussion), Tony Sales (bass, percussion) with Mickey Brook (drums on B4), Rick Danko (bass on A5), Don Ferris (bass on B4), Levon Helm (drums on A5), Mark Klingman (electric piano on B1), John Miller (drums on B1), Bobby Moses (drums on B1), Don Lee Van Winkle (rhythm & acoustic guitar on B4). Produced by Todd Rundgren; engineered by Jim Lowe, Jack Adams.