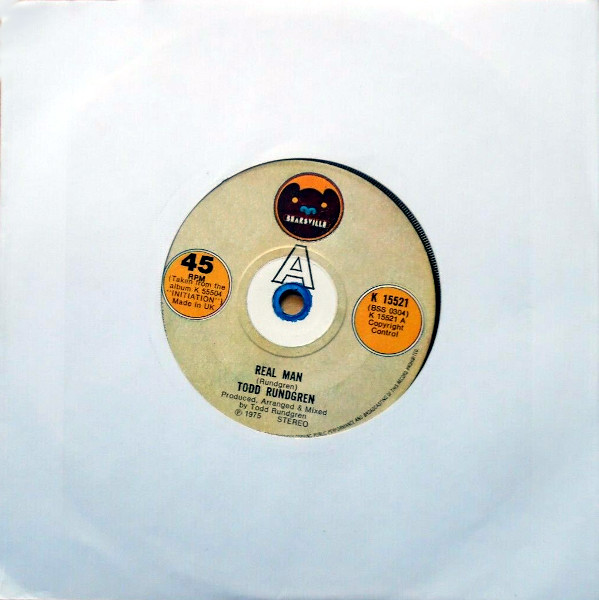 A really great song that never got the radio play it deserved, because radio stations weren’t run by real men.

The song “Real Man” was marketed months before the release of Initiation and, in my opinion, is one of the most emotionally powerful songs that Todd Rundgren has written. That it didn’t chart better was always a mystery to me, although the fact that it seemed to be playing at the wrong speed couldn’t have helped. There are some slight differences between the single versions of these songs and their album counterparts, which could be because of the way the album was mastered (Initiation squeezed nearly two album’s worth of music on one elpee).

The B side, “Prana,” is an edited version of the opening “Intro – Prana” from “A Treatise on Cosmic Fire.” I never knew what to make of Todd’s treatise, since I haven’t been able to divorce it from the work of Alice Bailey, and maybe I’m not supposed to. Musically, the Treatise shows Rundgren delving deeper down the electronic rabbit hole. In many ways, Rundgren was a pioneer of electronic music, particularly in its application to pop music. If only he were able to reign in his more experimental tendencies… ah, but then he wouldn’t be Todd.

*Credited as “Intro – Prana” on the UK single.