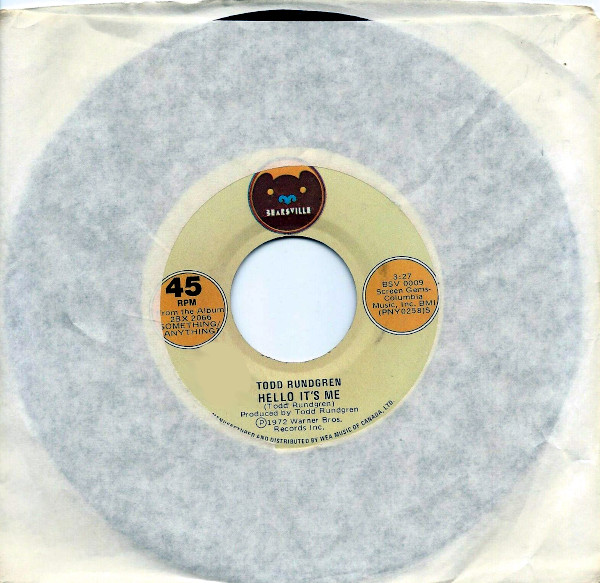 A remake of the Nazz song made a better second impression when it was re-released in 1973, becoming Todd’s only Top 10 single.

Kronomyth 4.2: The ballad of weenie Todd.

This is a story of three hellos, beginning with the debut of The Nazz, which featured a slowed-down and slightly tortured version of this song. Several years later, Todd Rundgren polished it up for his magnum opus, Something/Anything?, now presenting it as part of the great pop tapestry. It was one of the most memorable moments on a memorable album, Todd starting off with a little banter and two false starts before launching into one of the most perfect pop songs you’ll ever hear.

The song was edited down to three-and-a-half minutes, possibly doctored (the bass and vocals sound a little different) and released to an American public that didn’t give it so much as a “How do you do?” in return. One of the great pop mysteries, that. So Bearsville shelved the single and re-issued it the following year after the release of Todd’s next album, A Wizard, A True Star. This time, the single caught listeners’ attention and went up to #5 on the Billboard charts, giving Rundgren his first Top 10 hit. The B side, “Cold Morning Light,” is identical to the elpee version and continues the theme of lost love. It’s one of the few recordings that feature Todd playing the flute, the first instrument he tried playing as a child, and would warrant its own paragraph if I weren’t so lazy.