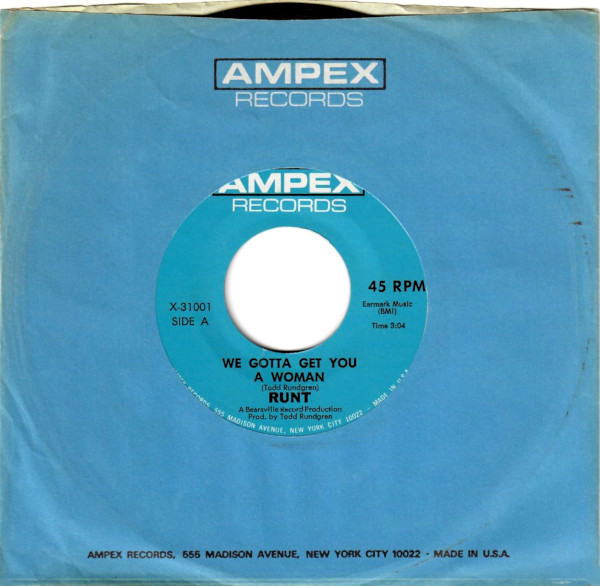 Rundgren’s songcraft shines through on his first single, years before the bro subculture became a (really annoying) thing.

This first single from Todd Rundgren (via Runt) set the stage for a slew of great songs over the years, from “I Saw The Light” to “Can We Still Be Friends.” We Gotta Get You A Woman is actually a song about friendship and not a love song. In fact, the character of the singer harbors more than a little bitterness toward women. I’ll admit, I wasn’t crazy about this song when I first heard it, but that chorus broke down my resistance, and the whole thing is a masterful bit of pop-music making, if a little rough around the edges from an engineering standpoint.

The B side is even better: a medley of songs that also appeared on Todd’s first elpee, Runt. (I think we can now all collectively agree that Runt wasn’t a real band.) The first song, Baby Let’s Swing, is written about Laura Nyro (“Laura, I saw you open in L.A.”). It’s a tease, since I could have listened to this song for five minutes. Instead, Todd shifts gears in a couple of minutes for another winner, The Last Thing You Said. Those two bits, if fleshed out to full songs, would have been two of the best things on the first album. Don’t Tie My Hands rocks harder and shows that Rundgren is just as powerful with a guitar in his hands. This medley, to me, is the real highlight of Runt and makes the case as well as anything on his first album that Rundgren is a talent worth watching.