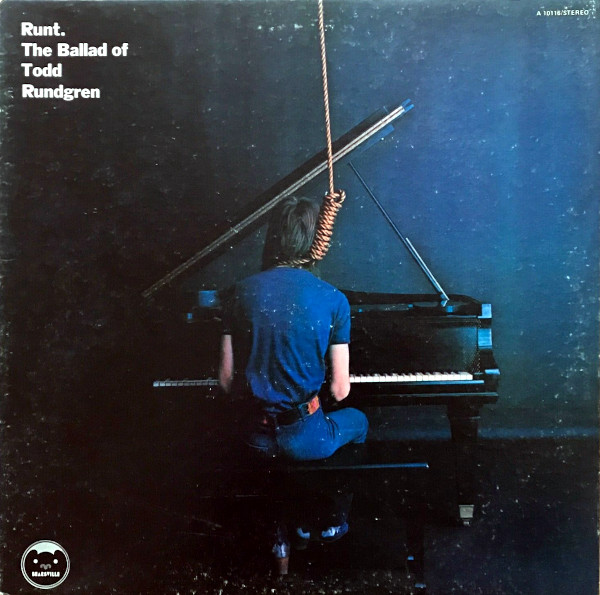 With more piano ballads than rockers, I’ve always found this a bit of a bore.

The Ballad of Todd Rundgren is a professionally produced pity party featuring piano ballads with minimal accompaniment (bass, drums) and multi-layered vocals, plus a few rock songs to shake things up. Where his last album, Runt, featured an eclectic mix of ideas, Ballad sticks close to the Laura Nyro/Joni Mitchell school of the solo confessional. It starts out promising enough with some surreal pop (“Long Flowing Robe,” “Bleeding”), but “Wailing Wall” bores me to tears and begins to show signs that Todd’s masterful production may be a thin veneer to hide structural weakness in the material.

Some people enjoy this album more than his last; most people, actually. Me, I prefer “Believe In Me” to “Be Nice To Me” and the medley of “Baby Let’s Swing/The Last Thing You Said/Don’t Tie My Hands” to “Parole.” Although this record was again assigned to Runt, there is no band; in fact, the entire album is in sore need of one, since most of the songs feel about one musician light. The material on his next album, Something/Anything?, tries more things and hits more highs.

The Ballad of Todd Rundgren is, as its name suggests, a portrait of the artist as a sensitive young man. The production is gorgeous in spots, the songwriting impressive enough, but I’m usually looking at my watch during the second side. That said, I can see where listening to this album repeatedly (something I really haven’t done) would breed a certain loyalty to it. I also enjoy the rock side of Rundgren more than the balladeer. If you’re not bored by ballads, then you’ll likely want to hang around for this one.

All songs written by Todd Rundgren.

*Slight variations on the song titles.