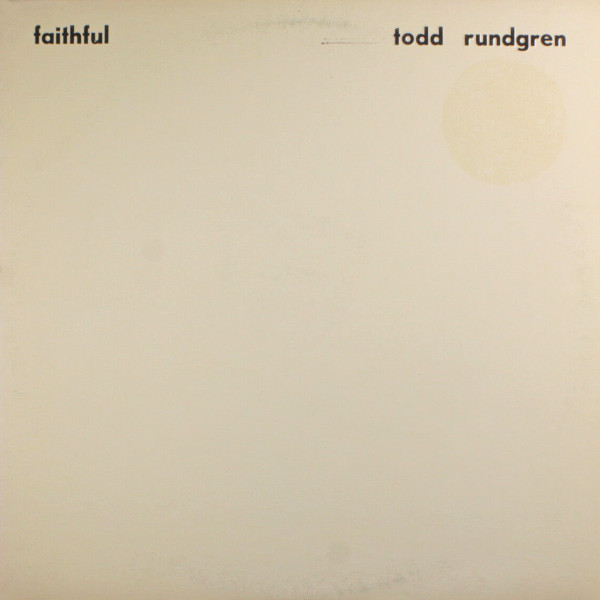 Kronomyth 7.0: Todd’s got everything covered.

Faithful (in some cases, uncanny) reproductions on the first side. An album’s worth of original aces on the second. Like Utopia’s Deface the Music, it’s hard to know what to make of the first half. Is it an homage to the sonic pioneers that came before him or simply a knobby need to show off his production savvy? I’m impressed, of course, but I was already. And I don’t buy Todd Rundgren albums to hear The Beach Boys or Bob Dylan.

So onto the real payoff for the faithful: the ballads, the rockers, the breezy numbers. Todd gives us two of each, starting with the bleak and heavy “Black and White.” This and the vegetarian “Boogies (Hamburger Hell)”–perhaps a parting shot at ex-drummer and Beefsteak Charlie’s heir Kevin Ellman?–feature the compressed and distorted sound most often associated with Utopia. (In fact, there’s not a lot that separates the second side of Faithful from Oops! Wrong Planet.) Then comes the cooling “Love of the Common Man” and, later, “When I Pray.” I like Todd’s midtempo masterpieces the best, and these rank right up there with “Love In Action” and “Marlene.” The ballads are usually a mixed bag. “Cliché” doesn’t click with me because it’s too fragile, but “The Verb ‘To Love’” is flawless, providing the album’s lump-in-the-throat moment.

You’d think I’d be happy with half a great album, and I am, but I keep eyeing the first side and wondering if it isn’t taking up too-valuable real estate. Fans who indulged Deface will do the same for Faithful, but there’s only limited happiness to be had in hearing Todd and the rest of Utopia try so hard to sound like somebody else.

Original 8-track version
A1. Happenings Ten Years Tome Ago
A2. Rain
A3. Love of the Common Man
A4. When I Pray
B1. Good Vibrations
B2. Strawberry Fields Forever
B3. Black and White
C1. Most Likely You Go Your Way and Ill Go Mine
C2. If Six Was Nine
C3. Cliches*
D1. The Verb to Love
D2. Boogies (Hamburger Hell)

*This should be “Cliché.”