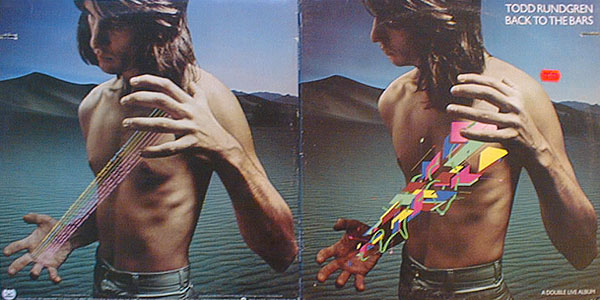 All the “normal” songs from Todd’s back catalog rolled into an evening’s worth of entertainment.

The label likely had Frampton Comes Alive in mind when they commissioned Todd to create a double live album. What they got instead was something more like Zappa In New York. Fans had long mused that, if Todd could only distill his songwriting genius and filter out the oddness, he would be a star. Back To The Bars, however, makes it plain that even at his most “commercial,” Todd was still too mercurial an artist to have mass appeal.

Of course, it’s not at all clear that Todd was trying to make a commercial record with this release. A notoriously painstaking producer, he lets a lot of noise filter into the mix, including sloppy banter with the audiences. The arrangements, recorded with a variety of supporting personnel (including members of the musical mime troupe, Hello People), range from intimate (“Cliché”) to full-blown numbers (“Eastern Intrigue”). The effect often feels like a cabaret act, particularly on the third record, which shifts from “Never Never Land” to “Black Maria” to “Zen Archer” and ends, improbably, with a soul revue that closes with a rushed version of “I Saw The Light.”

What labels had in mind with the double live album, beyond the imagined riches of multiplatinum sales, was the appeal that a collection of re-recorded greatest hits might have. In that respect, Back To The Bars is a success. You won’t find a better assortment of Todd’s bits anywhere else. AWATS, Todd and Initiation tested even the patience of fans. By editing out the oddness, Back To The Bars feels like skipping straight to dessert without eating your vegetables. The studio versions are cleaner, true, but the live versions of “Hello It’s Me,” “Couldn’t I Just Tell You” and “Love In Action” are nearly as good and I actually prefer these live versions of “The Range War” and “Don’t You Ever Learn?” to the originals.

Ultimately, Something/Anything? remains the logical place to start in Todd Rundgren’s catalog. After that, you might want to hedge your bets with Hermit of Mink Hollow or even Faithful, but you’d be getting a much broader picture of the artist with Back To The Bars. At first, I’ll admit, I didn’t have much use for a live double album from Rundgren. Looking back today, it seems like an oasis in a desert of deliberately difficult music.