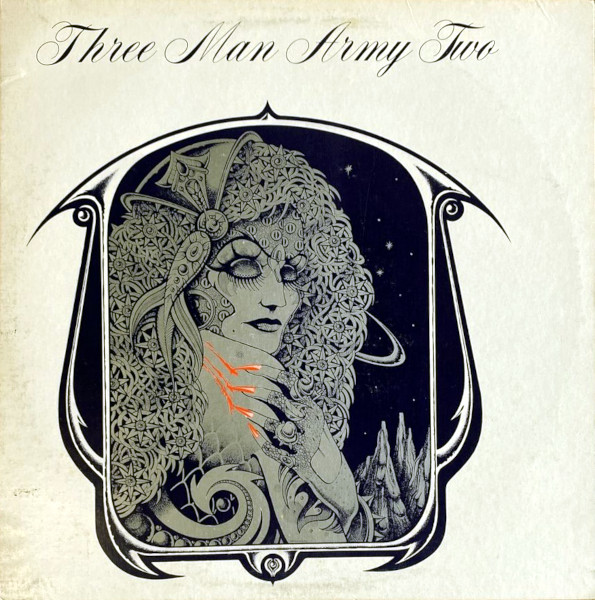 Even if their label couldn’t count, the Army’s third can still be counted on for good guitar-centric rock.

The machine was, of course, broken from the beginning because it was only interested in producing archetypes. Jimi Hendrix and Eric Clapton were archetypes of the rock & roll guitarist. Leslie West and Adrian Curtis were not. That isn’t to say that Curtis and West didn’t have their champions and admirers, but no one labored under the illusion of a Three Man Army revolution anymore. And so they joined the rank and file of rock & roll dreamstokers, producing potable music much in the way that Budweisier continues to make beer.

I realize that sounds dismissive (at least I didn’t call them “a forgettable British hard rock band… that sounded like warm-up fodder for bigger acts”), and the music of Three Man Army is not so easily dismissed. Every time I listen to them, I walk away impressed with the quality of the musicianship (granting that Paul Gurvitz will probably not be remembered as the world’s greatest bass guitarist), the ideas and the effort. There isn’t an album to their credit that doesn’t have at least two or three really good songs on it. But the band often struggled to put all the pieces together where great bands made it look effortless, whether it was a vocalist (Curtis) who frequently fell short of his own ideas, layered-on guitar solos that didn’t track so much as trample or lyrics that read like bad poetry.

All by way of saying that Three Man Army Two is an imperfect album. The opening Polecat Woman has a perfectly good guitar riff worthy of Aerosmith (back when Aerosmith wasn’t a synonym for spandex) and a nice little drum solo from Tony Newman, but I don’t know who at Warner Bros. thought that a song about a skunk-like woman was a hit in the making. Today is a vaguely psychedelic, philosophical song that features the best guitar multitracking of any Three Man Army song in recent memory. Flying is the poppiest song they’ve ever written. I would’ve chosen this as the album’s single, but then I’ve also been known to listen to “The Things We Do For Love” on an endless loop for hours. One of the new wrinkles on Three Man Army Two is the orchestration from Martyn Ford, which prominently figures on Space Is The Place. The strings had me thinking of early Elton John and Electric Light Orchestra (c. On The Third Day), two groups I don’t normally associate with Three Man Army.

Side two kicks off with the proggish and nearly majestic Irving (I know, who comes up with these titles?). Paul Gurvitz steps forward for a rare and welcome bass solo. I Can’t Make the Blind See is the big orchestral ballad, featuring strings, backing vocalists and what appears to be a pre-Brand X Peter Robinson on piano. (A common name, so don’t quote me on that.) Burning Angel atones for the previous, borderline “Border Song” moment with the heaviest riff since “Polecat Woman.” In My Eyes is one of those Three Man Army songs that reminds me of The Who at half intensity before shifting to a gentle ending.

Typecasting this as hard-blues rock or crossover prog or some other compound noun of your choosing misses the point that Three Man Army defies easy categorization. Guitar and drums are the driving forces, but Adrian Curtis seems intent on visiting as many different destinations as possible. The result can feel noncommittal at times, as the band isn’t as heavily invested in hard rock as Hendrix or blues-rock as Clapton. But there is a whole army of rock bands from Uriah Heep onward who slip in and out of stereotypes and still deliver the goods over the course of an album. Three Man Army Two isn’t the work of a “forgettable” rock band. It’s simply that too many people weren’t paying attention.