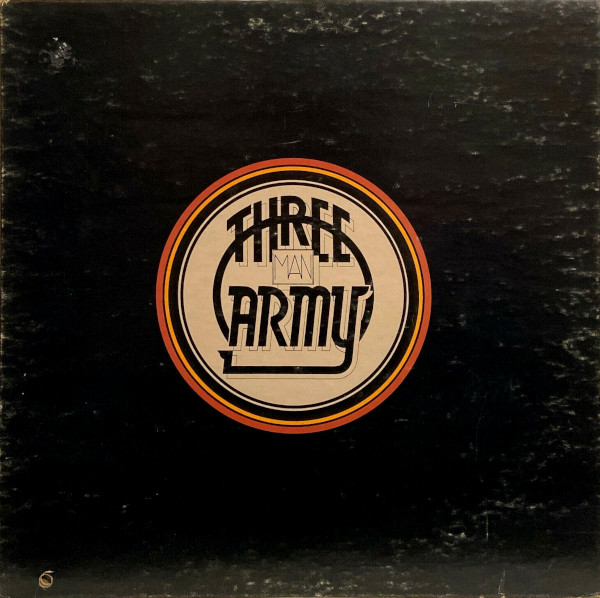 The group’s second album was shelved for over a year, at which point, Three Man who?

Contract negotiations of some kind would seem to be the cause for Three Man Army’s long-delayed second album. Recorded in April 1972, Three Man Army wasn’t released in the US until October 1973 and didn’t get a European release until the following year under a different title, Mahesha. Those listeners who bothered to tune in were treated to a tasty second helping of the band’s hard blues/rock, which continued in the same vein (Jimi Hendrix, Cream, Mountain, Robin Trower) as the first album. The group also got a new drummer in the interim, Tony Newman, who does everything that you’d want a drummer in a power trio to do (i.e., kick ass and keep the beat).

If Adrian Curtis/Gurvitz wasn’t a household name, he was building up a reputation among his peers. Buddy Miles asked Adrian to join his band, Buddy Miles Express, after the first Army album, in effect replacing Jimi Hendrix. That led to Adrian being approached by Ginger Baker, Eric Clapton’s former partner. I can’t imagine higher praise for a guitarist than being asked to “stand in” for Hendrix and Clapton. Unfortunately, Three Man Army never got the attention or the support it needed to break through. Psychedelic blues/rock was on the wane, and while some artists such as Trower and Leslie West were able to cash in on their name, not so Adrian Curtis.

The group’s second album is more overtly psychedelic than the first. There is the opening instrumental, which Paul Gurvitz has described as the band’s take on Hendrix’ “Star-Spangled Banner” (source: http://dmme.net/interviews/pgurvitz.html), an unexpected cover of My Yiddishe Mama. Say what you will, if you can make that song rock you can make anything rock. The new trio then gets down to business with the crunchy guitar- and drums-driven Hold On, a logical choice for what should have been the album’s single. (As it turned out, no single was forthcoming.) Come Down To Earth is one of several trippy numbers that reference drug use. (The Trip chronicles a bad trip and duplicates the experience with surreal layers of guitar.) Take Me Down From The Mountain sounds like mountain music with its thumping bass guitar, while Woman marries the band’s psychedelic blues-rock sound to a chorus worthy of George Harrison.

The second side starts with Mahesha, a really cool and heavy song that served as the album’s title in Europe. (“Mahesha” is another name for the Hindu god Shiva, which is about 180 degrees from where this album started.) Take a Look at the Light recalls the songwriting of Clapton and Pete Townshend, two names that invariably come up when I’m listening to Adrian’s music. Of minor interest, the song was originally co-credited to Lee Baxter Hayes, the drummer for the short-lived Sam Apple Pie. (Now there was a band with a bad name.) The album comes to a trippy close with the two-part Can I Leave The Summer and “The Trip,” which kind of foreshadows the strange storytelling of “Mad Jack” from the first Baker-Gurvitz Army album.

I tend to hear Three Man Army as a Robin Trower or West Bruce & Laing with a stronger psychedelic pop influence. You’re less likely, for example, to encounter a 60-second guitar solo from Adrian Curtis. Instead, he frequently overlays the fireworks on top of an existing rhythm part, which ends up sounding like he’s competing with himself for attention. The band mounted a brief US tour after the release of Three Man Army, but the battle for the bright lights of stardom had already been lost. As with all the Gurvitz Brothers projects, Three Man Army/Mahesha is well worth seeking out as an interesting sequel to the psychedelic power trio style that Cream and Jimi Hendrix started.

*On Mahesha, all songs were credited to Adrian Curtis except A1.