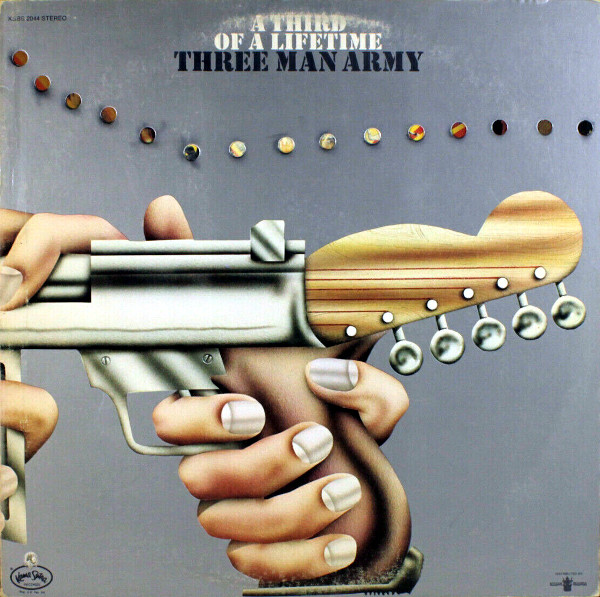 Three Man Army was a British hard rock band featuring brothers Adrian and Paul Curtis (née Gurvitz), recently from The Gun (“Race with the Devil”). Their first album, A Third of a Lifetime, invites comparison to Mountain, Robin Trower, James Gang, Jimi Hendrix—in other words, hard rock trios dominated by a very talent guitarist. Adrian Curtis plays rhythm and lead guitars, keyboards, sings and writes nearly all the material; maybe they should have called it One Man Army. Although the album didn’t produce a hit on the magnitude of “Race with the Devil,” What’s Your Name? should have caught more attention for its psychedelic mix of Hendrix energy and Beatles harmony.

I’ve been listening to this record for the better part of several days now, and I continue to come away impressed with Adrian’s songwriting and particularly his guitar playing. With Trower, I tend to get wrapped around his distinctive guitar tone, and Adrian Curtis doesn’t have as distinctive a style. There are elements of blues-rock, psychedelia and hard rock swirled together in his playing, which in turn get swirled together with overdubbed solos that are, in some cases, horribly mixed. Paul Curtis and Mike Kelly provide solid support; Paul appears to take lead vocals on a couple of tracks with good results (Another Way, Together) and Mike Kelly (on loan from Spooky Tooth) is hardly a liability on drums. The album also features several appearances by Buddy Miles, who shared a producer with the band, including a pair of instrumentals (Nice One, Midnight) that are notable for nothing other than the presence of Miles.

A Third of a Lifetime has been called “crossover prog” by the good folks at ProgArchives, though I would politely disagree. The instrumental A Third of a Lifetime is as good as any of Tony Iommi’s orchestral oases and “Together” does recall King Crimson’s “Cadence and Cascade,” yet most British hard rock bands from the period intersected with prog at some point with no intent of crossing over. Three Man Army seems quite content as a hard rock band, and Adrian lets his guitar do the talking most of the time—wisely so, as the lyrics behind a Butter Queen or See What I Took don’t suggest any great depth. That said, Three Man Army and Agent Man capture the plight of the rock band well and had me thinking of The Who.

Sadly, “Three Man Army” turned out to be a prophetic anthem for the band. No one seemed to know how good they were, and no one seemed to care about yet another hard rock trio. Fans of British hard rock have come to appreciate A Third of a Lifetime as a very good record by an underrated outfit. If the band’s fallen standard is today partially raised by prog fans, that’s never hurt Procol Harum or Spooky Tooth. (Yeah, I know, this review isn’t very good, and you deserve to read a good review of this, so here’s one at the Progressive Aspect.)

Songs written by Adrian Curtis unless noted.
*Appears as “One Third of a Lifetime” on some releases.

Released on elpee in November 1971 in the US (Kama Sutra, KSBS 2044) and the UK (Pegasus, PEG-3). UK elpee features gatefold cover with yellow tint.