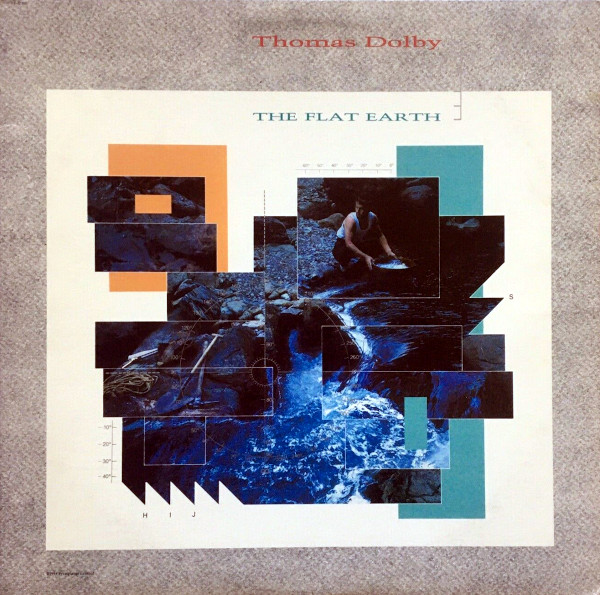 Kronomyth 2.0: Too close to the edge.

Thomas Dolby is a serious artist who cannot be confined by conventional pop music structures. So says The Flat Earth, his second album. This point is made clearly up front with the fractured, unbalanced Dissidents and reinforced on every track that follows. Even a relatively straight cover of I Scare Myself is nothing more than a ticking time bomb designed to throw the listener off balance. Some people, surprisingly, enjoyed this album. Flat-earthers, the lot of them.

I thought The Golden Age of Wireless would usher in a golden age of electronic music with Thomas Dolby at its fore. Instead, Dolby completely removes himself from the commercial equation with this standoffishly strange music, leaving the future to Howard Jones, apparently. Not that a song like Hyperactive! didn’t sound like the future at the time, but it wasn’t a future most people wanted. The noisy production, unnatural rhythms, busy arrangements and mixed-media overload were a distant vision of a tomorrow that never arrived, despite the fact that Dolby wasn’t the only one forecasting such a future (cf. Big Audio Dynamite, The Art of Noise).

So, is The Flat Earth an album ahead of its time or a musical prediction that never panned out? I’d say it’s a little of both. As an eco-conscious concept album, it’s also preachy in spots. I mean, no one told him that Mulu the Rain Forest may not have been a great idea? Really? This is what happens when artists get too far up their own ARPs.

The album is sonically stunning in spots. White City is a very good song, Screen Kiss is appreciably atmospheric and “Hyperactive!” never fails to catch my imagination in a “what would happen if Michael Jackson popped a handful of speed and took a few hits from a helium balloon” kind of way. Dolby even pitched the idea to MJ, who wisely passed.

I have returned to The Flat Earth many times over the years hoping to hear something I may have missed, but it’s more a case of misplaced loyalty than anything intrinsically interesting in the music. In fact, I pretty much stopped buying Thomas Dolby records after this, not that they were hard to avoid, as Dolby didn’t release another proper album for four years (Aliens Ate My Buick). There’s no doubt that Dolby followed the beat of his own drum machine, and you can’t help but admire him for that. Still, there’s no earthly reason to champion this as second golden age, because it isn’t.