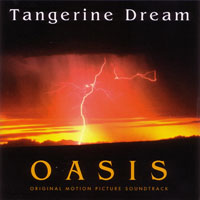 Did you know that the Canyon Dreams video sold over a million copies in the US? You can bet that Miramar did, so here we are (again) with another southwestern landscape sampler. I’ve toured the southwest and I can tell you that the land was made for music. One note, flat. But we’re talking about the spiky anomalies here: the deep canyons, improbable mesas and architectural oddities. Daliesque nightmares, but can you dance to them? Apparently, yes. Tangerine Dream had largely devolved into a brand by this stage, a business really. Froese & Son: Electronic Confectioners Since 1969. I’ve got a sweet tooth for the stuff, so I’m not griping. “Zion,” “Flashflood,” “Chia Maroon,” right up my alley. But if this had come from, say, the Natural Sounds Orchestra or some such faceless concern, I’d be talking about this as product rather than music. Instead, because it says Tangerine Dream on the cover, I stick my head deep in the crannies and crevices looking for (and finding) the lost space spelunkers of old. I come back with a report that says “Waterborne is crystallized mist descending.” I come back with a report that says “Cedar Breaks is a quasi-religious meditation on nature.” And I keep coming back because the candy of Tangerine Dream hasn’t cost me a tooth yet. Oasis, in case you’re wondering, didn’t sell a million copies or even half that here. The canyon dream was over. But it is a good album of new music, not an empty soundtrack. Percolating sounds, humid banks of synthesizers, snappy club beats and some of the old Tangerine magic conspire to make this a passable, pleasant journey. Some of the proper releases from this period (Goblins’ Club, Turn of the Tides) have more to offer, but not much more, so feel free to slip into Oasis if you want to sit down for a spell and relax.

* Available on CD only