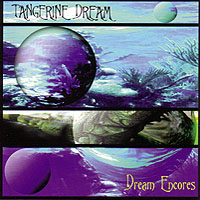 Dream Encores would seem superfluous on the surface, collecting live performances from the late ‘80s and ‘90s that had appeared on earlier, sometimes obscure releases. Thus, the “encore” here is in the sense of the interjection not the noun; no human interaction occurs in these live recordings, no applause seeps into the digital pipeline. You can fault Tangerine Dream for pilfering from their own pockets with a spate of “new” releases in the late ‘90s, and yet Dream Encores serves as an excellent introduction to their live catalog (think of it as a best-of-live release, and you’ll see where this sort of thing could succeed). There’s a mix of old and new (leaning decidedly toward the latter), including their electric interpretation of Jimi Hendrix’ “Purple Haze” (featuring Zlatko Perica on guitar) and a dull, dry walk through The Beatles’ “Eleanor Rigby.” Only two selections here date from the same venue; otherwise, these performances are drawn from different years (1986-1997), in different locales, with different lineups. There’s plenty of variety, from the classic “Dominion” (performed in 1986) to recent material like “Forth Worth Runway One” and “Towards The Evening Star.” Not everything on here is A material, but the selection is stirring enough often enough to hold the listener’s attention. There are old classics re-polished in the ‘90s (“Thief Yang and The Tangram Seal”), mid-career cuts captured in ‘80s amber (“The Midnight Trail”), and newer tracks you might have missed the first time around (“Story of the Brave”). Compared to a disc like Tournado, which presents the band from a purely modern vantage point, Dream Encores covers more ground. Because the recordings bypass any ambient elements, the disc never feels like a live performance, all the better to serve as a career sampler. If you’re travelling this far into the band’s discography, this is an ideal place to stop and reflect on the sights and sounds behind you.