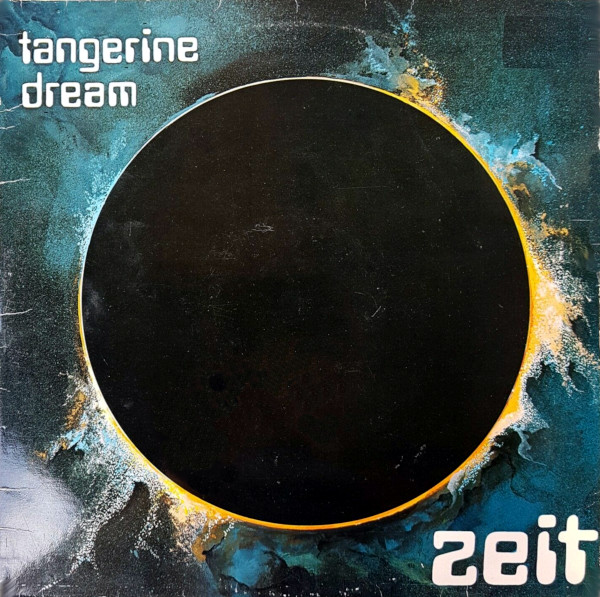 The classic trio of Froese, Franke and Baumann create and then explore alien worlds in these four electronic tone poems.

Kronomyth 3.0: Piper at the Gates of Ohm

The band’s third opus, Zeit, is the culmination of their original mission: to create new worlds of sound using electronics and explore them deeply. The inspiration for the journey was likely the music of Pink Floyd and the burgeoning experimental rock scene that saw meditation, medication and mechanization as doorways into a new musical world. Not that you need to be medicated to appreciate this music, but since uncle sam seems intent on medicating the unruly masses anyway, you might as well do something interesting with your freizeit.

Despite this being the first album to feature the full-time participation of Peter Baumann (the earlier “Ultima Thule” single marked his official debut in the group), Zeit is really Edgar Froese’s journey. Credited with playing the guitar and “generator,” a better description might have been sound sculptor, as Froese uses electronics and distorted guitar to shape and populate his alien soundscapes. You’ll hear this to best effect on “Nebulous Dawn,” which sounds like an amazing train ride through a black hole.

Each of the four side-long movements begins with the birthing of a new world that slowly breeds a richer ecosystem of sounds. I had the same sense of creation at work on TD’s earlier albums, but they were scarier journeys that struggled to find the right instruments to chip away at the sometimes impenetrable madness of Froese’s imagination. On “Birth of Liquid Plejades,” the right instruments finally appear: cellos, organs, synthesizers (which the liner notes spell as “syntheziser,” a charming reminder of the instrument’s newness), guitars and electronic sound generators. It’s here that Tangerine Dream creates a sustainable language for the new classical movement that fuses the past with the future. The placement of the music in four movements is an obvious nod to Froese’s classical aspirations, but the four songs are rather standalone tone poems on a similar theme, and not linear movements of a larger work.

The final two movements, “Origin of Supernatural Probabilities” and “Zeit,” basically repeat the breakthroughs of the first record. “Origin” implies an internal journey through the use of a synthetic heartbeat, “Zeit” begins with an alarming introduction (literally) before settling into more sonic mindsplashes. Both arguably add little to what the band achieves on the first elpee other than volume. I suppose they could have made the Washington Monument smaller too, but then all those congressmen would have to buy Range Rovers to compensate for their tiny and/or misshapen wiener schnitzels.

Over the years, Zeit has received considerable attention in re-issues, from straight double-elpee reprints to expanded remasters. More recent versions include the contents of a live 1972 performance split into two parts and titled “Klangwald” (which would be translated into English as “sound forest”). It’s a slightly brighter entry than the pieces on Zeit, pointing forward to the albums ahead.