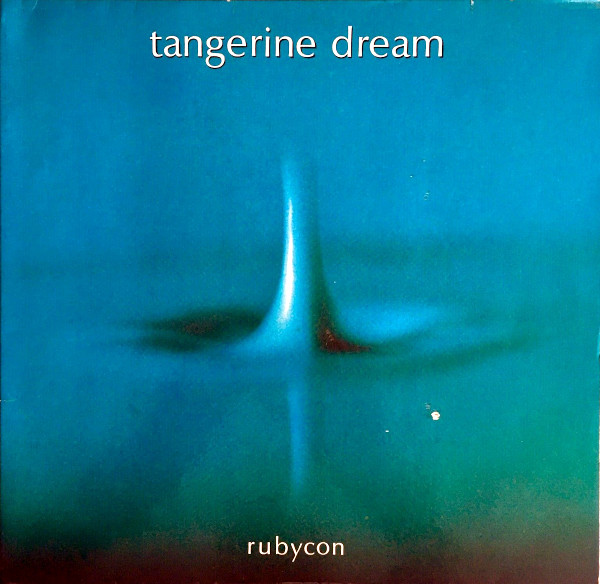 A purely electronic album that is both more streamlined and improvisational than Phaedra, but no less inspired.

Kronomyth 6.0: The point of node return

Beginning with Phaedra, Tangerine Dream perfected their sound sculptures and, throughout the rest of the decade, recorded some of the most exciting electronic works ever captured. Rubycon picks up where Phaedra left off, this time featuring tighter rhythmic patterns that shift beneath the music like massive tectonic plates of sound. No guitar or drums are featured, as the trio focuses on purely electronic sounds including synthesizers, organs, mellotron and a modicum of voices. This approach gives Rubycon a more streamlined sound than Phaedra that pulses with purpose as though a journey through alien worlds.

While parts of Rubycon belong with their best work, it has never been my first, second or third favorite Tangerine Dream album. Maybe that’s because this album feels more improvisational than Phaedra or Force Majeure. Exciting and stationary sections share the same stage, and there are moments where I’m convinced Rubycon is a work of genius (the opening minutes of “Part One,” the closing minutes of “Part Two”) and stretches where it seems the three members are feeling out each other in search of the next source of inspiration.

Rubycon is also light on melody; there is no crystallizing heroic theme to rally around. What you will find here is electronic music caught in the act of creation from the minds of three complementary masters. The trio of Baumann, Franke and Froese are interlocking pieces that shift brilliantly from one idea to the next—adding, reducing, refining and retooling sounds like a carefully controlled kaleidoscope. Not every move is premeditated, but the entire movement is eminently suitable for meditation and exploration.

It’s interesting to think that Tangerine Dream was originally influenced by Pink Floyd, because that band never imagined an interstellar journey so deep. Rubycon and the albums around it represent electronic music at its best. In fact, I’m not aware of any electronic musical act that has equalled them. It has its lulls, but much of Rubycon is the musical gods at play and is rightly regarded as a classic album for this reason.