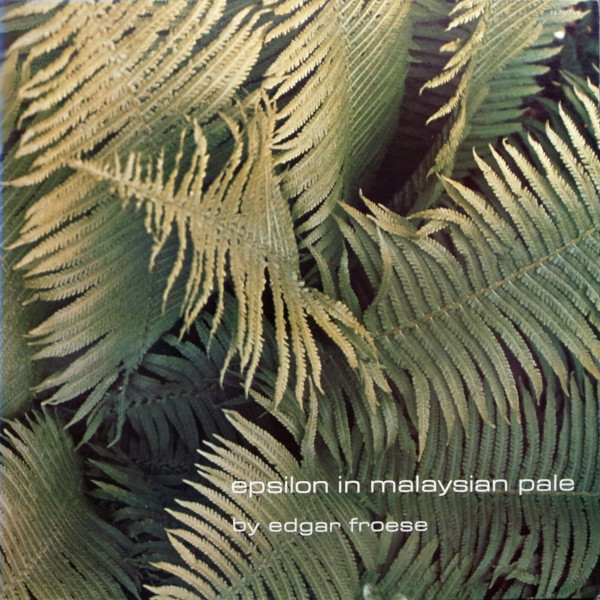 A travelogue of electronic music that is separate from but connected to the TD masterworks around it.

He flung open the gates. The warm glory of afternoon sunlight made him start and blink his eyes. “Oh, roof!” he repeated in a voice of rapture. He was as though suddenly and joyfully awakened from a dark annihilating stupor. “Roof!” – Aldous Huxley’s Brave New World.

Edgar Froese’s second album continues in the classic vein of Rubycon, Ricochet and Stratosfear. It features two side-long tone poems that employ many of the same musical elements: flute-like synthesizers, sequencer-based journeys, a dynamic use of light and dark sounds and moments of both unnatural beauty and heroic discovery.

The earlier Aqua had been a darker, stationary study of sound and, in the opening moments of Ypsilon In Malaysian Pale, it seemed that Froese might repeat the exercise. But that fear is quickly dispelled as warm, luminous sounds emerge, like pure sunlight itself, illuminating Froese’s enchanting adventure in nature (inspired, it would seem, by Froese’s recent travels in Malaysia). In fact, Froese appears to place himself in the music, as the flute (reproduced through the synthesizer) wonders at the world around it, shifting from foot traveler to train passenger (my internal musing, not the author’s).

Effectively divided into halves, “Yspilon In Malaysian Pale” feels like the better parts of Phaedra (part one) and Rubycon (part two) fused together. The second musical travelogue, Maroubra Bay (presumably inspired by the Australian bay of the same name), is initially a much darker piece. That darkness soon gives way, however, to a fascinating—almost mesmerizing—journey through an imagined undersea world (again, my imagination). Froese selects from a slightly different palette of sounds, at times inviting comparison to Vangelis (Heaven and Hell in particular). “Maroubra Bay” culminates in a kind of quasi-religious experience at the end (I have the speculative impression of being in a cathedral-cave), then fades slowly as Ypsilon’s dreamworld slips away.

Ypsilon In Malaysian Pale is far from a pale imitation of Tangerine Dream. It is a full-blooded brother to Rubycon and Ricochet that displays a mastery of electronic sound on a grand, almost-classical scale. Heartily recommended to anyone who enjoyed the journey from Phaedra through Tangram and is looking for an undiscovered destination of equal beauty.

All songs composed by Edgar Froese.
* Appears as “Epsilon In Malaysian Pale” on most releases outside of Germany.

The electronic “group,” Malaysian Pale, appears to have taken their name from this album. Led by Manfred Saul, they’ve released a few new age albums over the years.