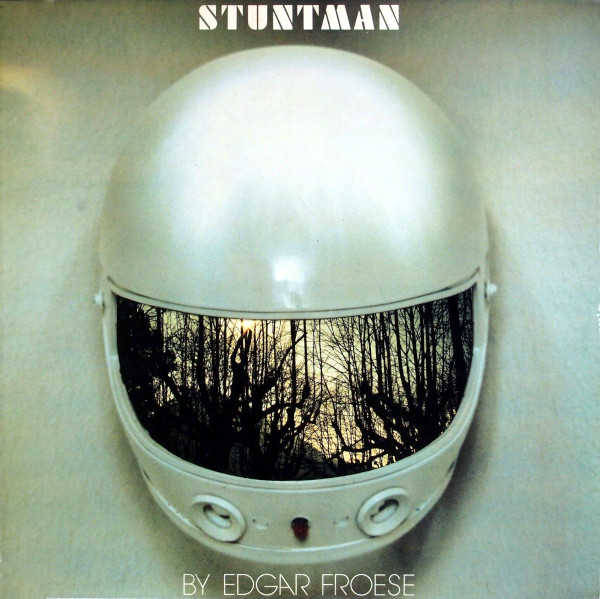 A musical, melodic and slightly more streamlined vision of Tangerine Dream’s electronic music at the time.

Kronomyth 6.0: The adventures of Helmet Zimo.

I’m in one of my “Edgar Froese is a musical genius” moods, so you’ll have to forgive me. Yesterday I was in a “Fluorescent light bulbs are a work of genius” mood. (So many geniuses, so little time.) My fancy for Froese didn’t spark out of the blue, but from listening to Stuntman for several weeks now. And I’ve come to the conclusion (or crept up on the conclusion and am now poking it with a stick to test its consistency) that Stuntman is a work of natural music genius.

Now you noticed the “natural,” didn’t you? That’s my way of saying that Stuntman doesn’t try any new tricks. New songs, sure, but they flow from the same creative spring that fed Force Majeure and Tangram. Like Aqua before it, Stuntman is an extension of his musical art at the moment rather than a departure from it. So I listen to a “Stuntman” or “Drunken Mozart in the Desert” and it’s like sneaking into the museum basement at night or hopping a fence to find a walled garden (or like buying a compact disc for fifteen bucks and sitting on my butt and listening to it, if I really wanted to embellish).

As much as I like Phaedra and Rubycon, they were a little static (I thought). Beginning with Stratosfear, the band began to paint with smaller strokes and more color. Stuntman is Edgar Froese with a full paint box, a brush in each hand, replicating (with perhaps a bit less precision) the music of Force Majeure and Tangram. These songs are more than sketches from the same creative period, they’re finished paintings. And the more I listen to it, the more I see the genius in its handiwork: the sounds, the melodies, the mastery of mood, the cold nurturing bosom of analog synth wrapped tight around its electronic soul like a, well, like a fluorescent bulb.

All titles written by Edgar Froese.