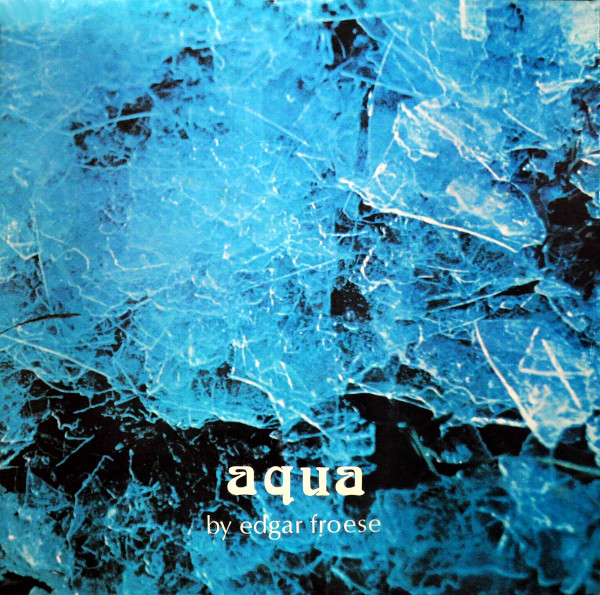 I picked up a copy of Aqua in 1983 when I was working as a college deejay (it was a very localized station that barely reached beyond the campus, so it’s not nearly as cool as it sounds) and probably traded the station a pop album for it or something. It wasn’t the sort of album you could walk into a record store and expect to find. At the time, I didn’t own anything by Tangerine Dream older than Phaedra, so Aqua always struck me as an experimental, electronic anomaly. Today, I can recognize this as a return to the band’s pre-Phaedra work: spacey, scary, amorphous, amelodic, electronic.

As the first Edgar Froese solo album, it’s not far removed from the work of Tangerine Dream; Chris Franke even makes an appearance on one track. Remembering that Virgin was still in their infancy, they gave Froese quite a bit of artistic license, which allowed the TD leader to create a record using Gunther Brunschen’s “artificial head system,” an idea that was never as good as it (should have) sounded. At a high level, the artificial head system sought to replicate true binaural recording by placing the microphones in a replica of the human head, complete with ear canals. Like I said, it sounds like a good idea, and on headphones it does seem to give the songs on the second side (where the technique was used) an added sense of spatial dimension, but it was less effective in other settings.

Anyway, onto the “music” itself. The opening title track, Aqua, is Froese’s watercolor portrait of an alien landscape, possibly in space, where electronic sounds bubble and burble and strands of light pierce the hermetic world. It’s one of his more experimental, avant-garde creations; in fact, that would apply to the entire album. Panorphelia borrows some of the melody and patterns used on Phaedra, and could be seen as the album’s most approachable track. Even here, however, Froese contains his music to a palette of electronic sounds; you’ll hear very little of the organ or other traditional instruments on Aqua.

The second side is where the artificial head system comes into play. Its effect is immediately felt on NGC 81, in which the airplane sounds whoosh around your head. This added sense of spatial dimension is very interesting; the music itself, eh, not so much. Franke’s moog gives the song a sense of movement, but once the song is over the effect and any memory of it dissipate. Then again, that would describe most life events in my world, so you may want to take that with a grain of salt. The closing Upland has a similar effect in that the sounds move around your head, while the music returns to the bubbling/burbling electronics of “Aqua.”

If you enjoyed the avant-garde experiments of Tangerine Dream’s first few records, Aqua could be seen as a return to form(lessness). Subsequent solo albums by Froese are warmer, so I would direct fans of TD’s classic phase (1974-1980) there first (e.g., Stuntman, Ypsilon in Malaysian Pale). I tend to view Aqua as a solo journey into the science of recording; a journey on which Froese seems more fixated on how people would listen to the music, and less on what they would actually be listening to.

All songs written by Edgar Froese.