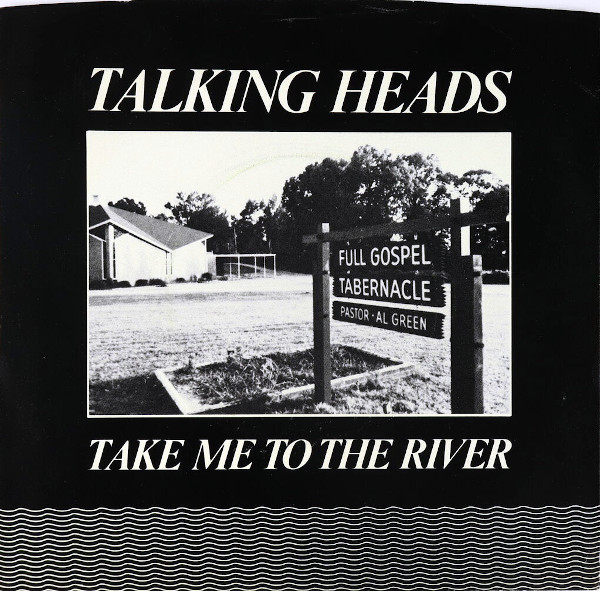 David Byrne’s droll version of Al Green’s river drained the soul out of it but kept the pain.

Kronomyth 2.1: (I can’t get no) sanctification.

Here are two candidates for the next expanded reissue of Talking Heads‘ More Songs About Buildings And Food, whenever that happens: the single edit of “Take Me To The River” (trimmed to a tight 3 minutes 36 seconds) and an alternative version of “Thank You For Sending Me An Angel” featuring acoustic guitars and Eno’s delicious marzipan touches. Both are better than their elpee counterparts; “River” because it cuts out David Byrne’s scratching and puts the emphasis back on Jerry Harrison’s marvelous keyboards, “Angel” because it’s more cuddly and less obnoxious than the first go ‘round.

The UK single featured “Found A Job” on the flip side, while a double 7-inch added “Love Goes To Building On Fire” and “Psycho Killer” back to back. On a different note, it’s interesting how new wave initially declared itself through revisions of older songs: “Take Me To The River,” “(I Can’t Get No) Satisfaction,” “Money (That’s What I Want),” “Tainted Love.” I wonder if that’s common to all new musical movements, a sort of mini-manifesto.

Original 7-inch single version (UK)
A1. Take Me To The River (Al Green/Mabon Hodges)
B1. Found A Job (David Byrne)