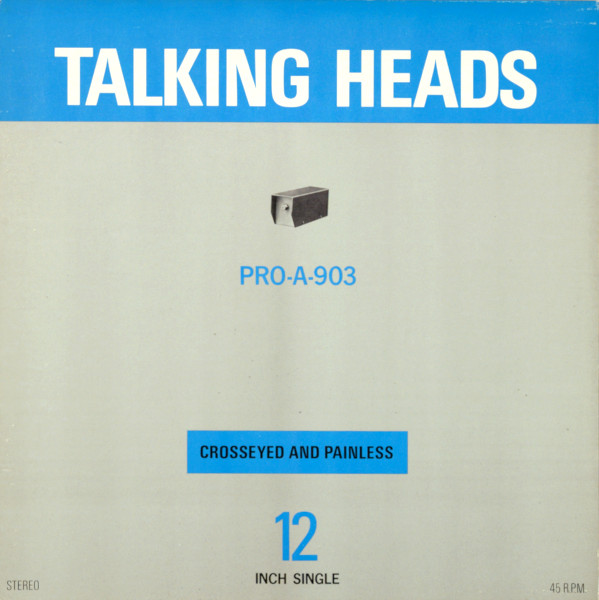 It’s got a good beat and you can dance to it, apparently.

Kronomyth 4.01: I’m still waiting… for a followup to Remain in Light.

Talking Heads’ hypercharged Afrobeat was the perfect soundtrack to the unstoppable flood of technology entering our analog lives. Crosseyed and Painless captured that moment with its opening line of “Lost my shape trying to act casual” and a barrage of sounds and rhythms that are anything but casual. The song, like most of the songs on Remain in Light, are a study in sensory overload. It is also irresistibly catchy and surprisingly funky. A video featuring brilliant choreography from Toni Basil using the “popping” style was made to accompany the music and is slightly longer than the elpee version. A shorter version was also produced and appears as the B side on a 12-inch promotional single.

The 12-inch single and the video are clearly targeted to hip hop/dance audiences (12-inchers were used primarily at dance clubs by DJs). The idea of a couple of guys like David Byrne and Brian Eno making dance music probably seems ridiculous on the surface of things, but art (and both men are clearly artists) is at least partially about breaking down old boundaries and discovering new ones. The pair discovered something completely new by importing Afrobeat into an alternative rock universe and getting funky with it.

In some regions, “Crosseyed and Painless” was sold as a 12-inch to actual consumers with The Great Curve on the B side. (A Mexican single also adds “I Zimbra,” the earliest version of Byrne and Eno’s vision, which first appeared on Fear of Music.) “The Great Curve” features the Heads’ updated Afrobeat with a big lump of singalong sugar tossed in by that kooky confectioner, Eno. Both “Crosseyed and Painless” and “The Great Curve” also feature guitar solos from Adrian Belew, who was fast becoming a fixture of the Talking Heads-Brian Eno-David Bowie--Robert Fripp axis.