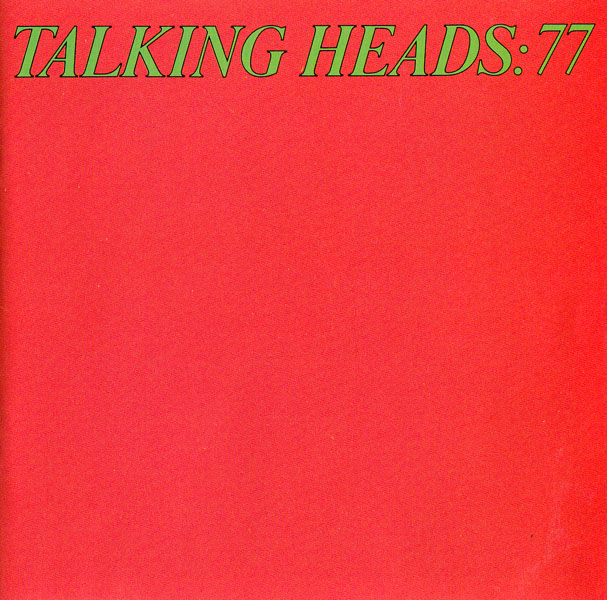 The band’s nervous, brilliant debut is a sugarcoated pill for an anxious age.

Kronomyth 1.0: A heads of their time.

William Ruhlmann captured this beautifully in a review for AMG, an excerpt of which follows: “All pretenses of normality were abandoned… the staggered rhythms and sudden tempo changes, the odd guitar tunings and rhythmic single-note patterns, the non-rhyming, non-linear, non-narrative lyrics full of aphoristic soundbites that came across like odd remarks overheard from a psychiatrist’s couch, and that voice, singing above its normal range, leaping into falsetto and from there into strangled cries like a madman trying desperately to sound normal.”

I was aware of this music in 1977, but Elvis Costello and (later) The Clash had the steam to reach my suburbs first, the Heads only landing in my little world with Fear of Music. The whole NYC scene (Television, Patti Smith) took years to filter down to me, so I can’t write a testimony to how Talking Heads: 77 changed my life. In fact, this is the last Heads album I bought, finally capitulating after resisting the purchase for years (I equate order with complacent thinking).

Spinning the clock back to 1977, this music would have instantly caught your ear and maybe even blown your mind. David Byrne sounded (and looked) like an accountant after a nervous breakdown, all his work papers shredded into musical confetti. It would be tempting to see the Heads as the class clowns of the new art rock school if Byrne’s angst weren’t so palpable. It’s a ride unlike any other, where the roads to Candyland and morbid self-obsession cross. Some of the treats are half-baked (“Who Is It?,” “Tentative Decisions”), others surprisingly intricate (“Happy Day”) and a few reveal a real sweet-tooth (“Uh-Oh, Love Comes To Town,” “Pulled Up”).

The subsequent Eno albums were alien creatures that often buried the band’s helium energy under layers of exotic effects and cross-cultural experiments. If Remain In Light was a mature cabernet, Talking Heads: 77 was a well-shook soda can. The more I listen to this, the more I might be convinced that 77 is indeed one of the most important alternative rock albums from the 70s/80s.

Original 8-track version
A1. Uh-Oh, Love Comes To Town
A2. Happy Day
A3. Don’t Worry About The Government
B1. New Feeling
B2. Tentative Decisions
B3. First Week/Last Week… Carefree
C1. Who Is It?
C2. No Compassion
C3. The Book I Read (beginning)
D1. The Book I Read (conclusion)
D2. Psycho Killer
D3. Pulled Up