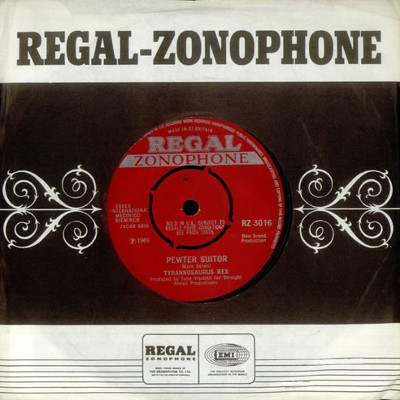 Believe us it’s mischievous and it daily does aggrieve us, that our platinum pixie poet and his acidkick did leave us.

Kronomyth 2.7: The song of salamander.

Bolan and Took rang in the new year with a new single that inched closer to the richer sound of Unicorn. “Pewter Suitor” instantly brings the playful rhyming of “Salamanda Palaganda” to mind, and in truth there isn’t much that separates the two songs. Where the earlier track was stately and exotic (e.g., the use of finger cymbals), “Pewter Suitor” is less restrained; in fact, it sounds like two intoxicated garden faeries playing jugband music. Listen closer, however, and you’ll begin to hear the chugging rhythms and barely contained delirium that Bolan would soon bring to the fore. The flip side, “Warlord of the Royal Crocodiles,” is a paean to some lost faerie lord played with utter solemnity. Both songs were later appended to the expanded release of Unicorn, lest any morsel from the banquet table of Bolan’s imagination go untasted.

*Listed as “War Lord of the Royal Crocodiles” on the UK single.

[Review] Tyrannosaurus Rex: My People Were Fair And Had Sky In Their Hair… But Now They’re Content To Wear Stars On Their Brows (1968)