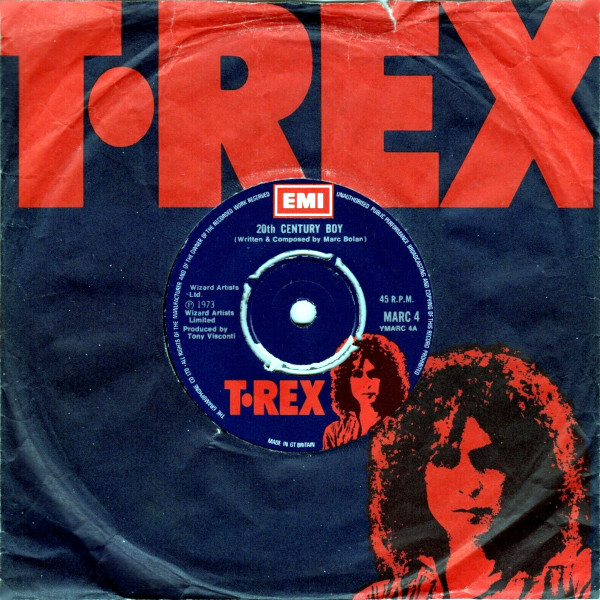 Bolan toys with the idea of being a hard-rocker, turns his amp up to 11 and aims for another number one single.

T. Rex stripped away two songs from the initial sessions for Tanx and released them as an advance single of sorts, scoring another Top 5 single with the hard-rocking 20th Century Boy. Personally, it’s not one of my favorite T. Rex songs (by a longshot, actually), but it’s a cut better than most of what turned up on Tanx. Marc Bolan was clearly trying to push the band into heavier terrain, straddling the line between glam and hard rock, but he just didn’t have the guitar chops or the menacing persona to pull it off. Which is probably why Ozzy Osbourne didn’t wear a feather boa.

The flip side, Free Angel, is a shameless rewrite of “Rock On.” Now, if you’re going to put new lipstick on an old track, there are worse tracks to choose than “Rock On,” so I’m not bitterly complaining, merely lamenting the dampening of Bolan’s once-glittering creative spark

And there you have it: a look forward to Bolan the crunchy hard-rocker, a look back to his gilded confections, and a world that clearly hadn’t had its fill of either. But it’s slightly alarming that the most interesting moments of “20th Century Boy” occur in its final, 30-second fadeout.