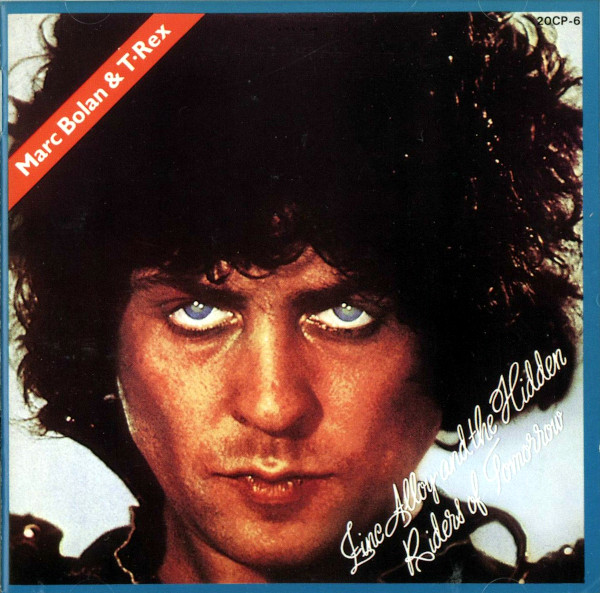 A slight return to form, although Bolan’s excessive and excessively odd behavior had begun to overshadow the music.

The rise of Marc Bolan/T.Rex was an evolution by accretion. Each album added more musical elements than the last, and by the release of T. Rex, Bolan and producer Tony Visconti had struck upon a magical balance of poet and pop star. Beginning with Tanx, however, too many added instruments began to throw Bolan out of balance. Zinc Alloy is even more excessive than his last, with a full rock band, choir and orchestra in tow. In some ways, the album is a return to form and a lot of fun. But in other ways, it’s a reminder that the golden age of Bolan was behind us.

Things started to change in 1972, when David Bowie introduced the world to Ziggy Stardust. Bolan, not one to be outdone, began to take a more electrified and dystopian stance. Even the title, Zinc Alloy and the Hidden Riders of Tomorrow, is an obvious nod to that album, but that’s where the comparisons end. Bowie’s was a carefully crafted and strangely sympathetic underworld, from “Lady Stardust” to “Rock ‘n’ Roll Suicide.” Bolan’s world is full of rapid-fire, nonsensical wordplay and over-the-top arrangements: “Venus Loon,” “Liquid Gang,” “Nameless Wildness.” The excess isn’t simply contained to the music; song titles like “The Leopards Featuring Gardenia and The Mighty Slug” and “Painless Persuasion vs. The Meathawk Immaculate” are indicative of Bolan’s lyrical verbosity.

Despite these flaws, those drawn to Bolan’s giddy, glammy arrangements and magnetic personality are likely to enjoy this record for what it is: an attempt to bring T. Rex into a more contemporary rock setting. “Teenage Dream,” “Change,” “Galaxy” and “Interstellar Soul” are good examples of Bolan stretching out his rock & roll muscles. The band still lacks a bonafide lead guitarist (and could have sorely used a Mick Ronson), and the Cosmic Choir is no replacement for Flo & Eddie (who were, Frankly, irreplaceable), but Marc Bolan & T. Rex (now his backing band, apparently) arrive at a kind of sub-Mott/Rocky Horror sound that works most of the time. Yes, “Carsmile Smith” is basically a rewrite of “Spaceball Ricochet, “Nameless Wildess” of “Baby Boomerang.” You don’t buy Marc Bolan albums expecting to hear complex polyrhythms. You do expect him to color your world with a little technicolor magic, and Zinc Alloy is a colorful record, even if the magic was beginning to fade.

All tracks written by Marc Bolan.