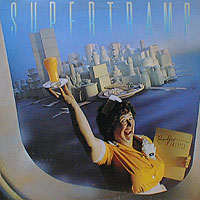 The happiest moments of my life have been mundane for the most part. They’re marked by what many have tritely called being in the moment: a kind of super-clarity (for someone constantly distracted like myself) of my surroundings combined with a general sense of contentment. I can remember, for example, cleaning my room with my Mom in the late Spring of 1979 and suddenly stopping because “The Logical Song” had begun to fill the room with its captivating magic from my AM/FM radio, and I had to stop lest I miss one delicious line, one sympathetic note, one drop of the musical ambrosia that the British Isles seemed to hoard in abundance. Long before the words “progressive rock” meant a thing to me, when things simply broke down into good and bad, Supertramp was infinitely good if such a thing existed in the universe. They straddled a world between 10cc and Alan Parsons Project, filtering their eccentricities through (what then seemed) a symphonic understanding of pop music, geniuses sympathetic to the musical ennui an American teenager might encounter while scanning the radio dial. In later years, the reveries of childhood give way to what we call reality (an evil if ever there was one), and we attach an asterisk to these old gods as a preventative to a pantheism that might admit mortals into the ranks of the immortals. Having let Breakfast In America grow cold over the years, believing I’d outgrown its surfeit of sweetness, I was delighted to find the same little boy still inside me. Listen to “Gone Hollywood,” “The Logical Song,” “Goodbye Stranger,” “Breakfast In America,” “Take The Long Way Home” and “Just Another Nervous Wreck” again. Listen to the songs in between. If Supertramp didn’t have their hand on the pulse of pop music’s powerful potentialities, if they weren’t a revelation to radio listeners who thought the airwaves were sleeping with the enemy too often, then you weren’t there in that room with me. By summer, I had added Breakfast to my growing record collection. I played it constantly, when I felt blue or misunderstood. With time my tastes changed, my raging hormones found a better mouthpiece in The Clash and The Dead Kennedys, and somehow I never found the time for Breakfast. Call it the cyclical nature of life, but I have time now, and it takes me back to a place that The Clash or In God We Trust, Inc. never could. Hello, stranger.