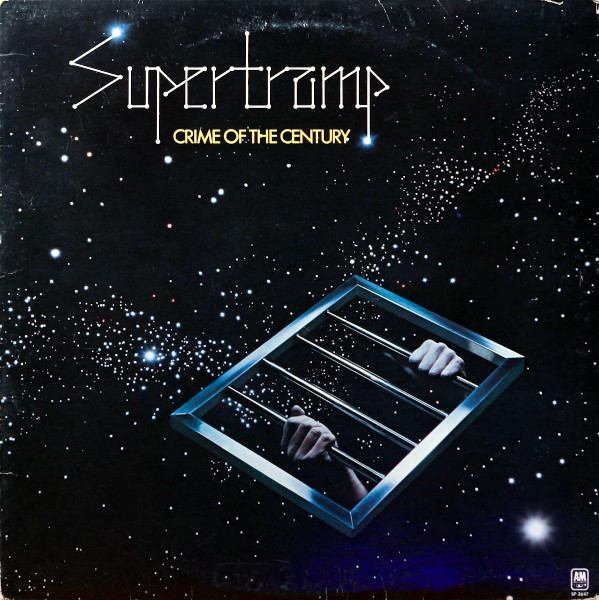 The third time proved to be a charm for the re-re-vamped ‘tramp with this progressive pop masterpiece.

Kronomyth 3.0: Dancing with the dark side of the moonlit night.

Rick Davies and Roger Hodgson had apparently spent the interim between albums listening to Genesis, Pink Floyd and The Kinks, pilfering a bit of each for their own concept album, Crime of the Century. Once again, Davies and Hodgson re-tooled the band, resulting in the classic lineup of John Anthony Helliwell on sax and clarinet, Bob Siebenberg on drums and Dougie Thomson on bass. Loosely chronicling the life of a man who feels crushed by society, the band’s third album most closely parallels Pink Floyd’s Dark Side of the Moon, but with the pronounced English sensibilities of The Kinks and Mott the Hoople.

The first two Supertramp albums failed to establish a signature sound for the band. Crime of the Century doesn’t suffer such an identity crisis, almost singlehandedly defining the Supertramp sound going forward. The arrangements are sophisticated, melodies abound and the lyrical perspective elevates the downtrodden man into a kind of antihero. The album produced two Top 40 singles in different parts of the world: Davies’ Bloody Well Right (a brilliant counterfeit of Floyd’s “Money”) and Hodgson’s Dreamer.

As a story, Crime of the Century doesn’t hold up any better than, say, Marillion’s Misplaced Childhood, but you won’t hear me complain about either album. School sets the stage for Supertramp’s dystopia from childhood, followed by the realization that life is unfair (“Bloody Well Right”) and the subsequent withdrawal from society (Hide in Your Shell). Davies ends side one with a loose tether on reality, Asylum, that had me thinking of Mott the Hoople on more than one occasion. The closing sound of a cuckoo clock is a nice touch.

The delightful “Dreamer” is a false paradise, brought back to earth by Davies’ mature realization of an unrewarding life, Rudy. The dramatic ending comes with If Everyone Was Listening and Crime of the Century, both of which raise the shadow of Pink Floyd again. In the end, the problem with the world is revealed to be our own inhumanity, which feels like a bit of a gyp, but then again you shouldn’t go looking for life’s answers on a piece of plastic.

Crime of the Century is clearly the band’s most ambitious work to date, and yet it might have benefited from an even heavier production hand, such as Bob Ezrin. Instead, you have an album that straddles the worlds of prog and pop, intellectual and sentimental at the same time. Importantly, Crime of the Century established a workable template for the band as one of the leading purveyors of progressive pop. While their next few albums more or less followed the same approach, the real crime would have been not doing that.

All songs written by Richard Davies and Roger Hodgson.